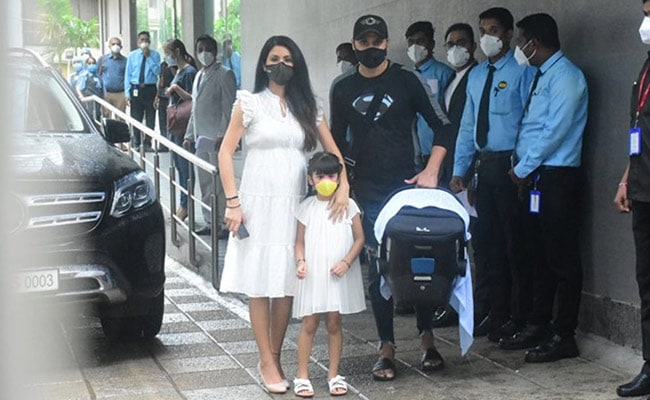 Geeta Basra with her family in Mumbai.

Actress Geeta Basra and her husband Harbhajan Singh, who welcomed their second child, a baby boy earlier this month, revealed their son's name on Monday. The actress posted a super cute picture of their daughter Hinaya along with the baby bay, who they have named Jovan Veer. In the picture, little Jovan Veer can be seen curled up in his sister Hinaya's arms. Sharing the adorable picture on Instagram, Geeta Basra wrote in her post: "Introducing Heer ka Veer... Jovan Veer Singh Plaha." In no time, the comments section of her post was filled up with emojis and congratulatory greetings.

Geeta Basra announced the news of their baby boy's arrival with an Instagram post, in which she wrote: "A new little hand for us to hold, his love is grand, precious as gold. A wonderful gift, so special and sweet. Our hearts are full, our lives complete. We thank the Almighty for blessing us with a healthy baby boy. We are overwhelmed with joy and would like to extend our gratitude to all our well-wishes for their constant love and support."

Geeta Basra  made her acting debut with the 2006 movie Dil Diya Hai. She is best-known for her roles in films such as The Train and Zila Ghaziabad. She was last seen in Punjabi movie Lock.