Gauri Khan Chills With AbRam, Roohi And Yash. Shah Rukh Khan Wins Us Over With His Tweet Again 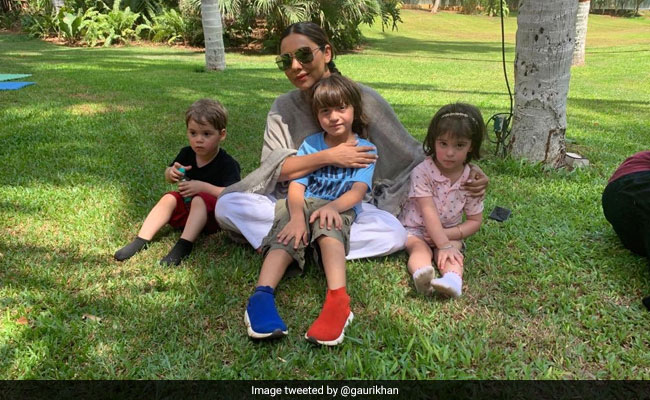 Gauri Khan just delighted us with an adorable (x infinity) photo of herself chilling with the "three musketeers" on a lazy Sunday afternoon and no points for guessing that Shah Rukh Khan had something to say about it. "Spending time with the three musketeers," Gauri captioned the photo, revealing the identity of the tiny tot trio - AbRam and Karan Johar's twins Roohi and Yash. In the photo, AbRam can be seen plonked on his mom's lap while Roohi and Yash are on either sides of the mother-son duo. Shah Rukh re-tweeted Gauri's post and gave a shout out to his wife, borrowing lyrics from AR Rahman's song: "Maa tujhe salaam," SRK tweeted.

Take a look at Shah Rukh and Gauri's tweets here:

This is not the first time that Shah Rukh Khan cheered for wife Gauri on social media. In March, he attached a special message for Gauri Khan in his post on World Theatre Day: "Being with you is like being on stage. There's so much light, I can't see anything else. Curiosity to know new, humility to accept will never know if fully... Makes you an actor."

"Being with you is like being on Stage. There's so much light, I can't see anything else". Curiosity to know New, Humility to accept u will never know if fully...makes u an actor. #WorldTheaterDay

Gauri Khan, who owns a line of exquisite interior decor named Gauri Khan Designs, debuted on the list of Fortune India's Most Powerful Women, when Shah Rukh Khan's way of congratulating her was this tweet: "On our family list of 'Fortunate' she is the most powerful!" Spotting Gauri Khan on the cover of Grazia India, Shah Rukh had also tweeted: "For us she is the Cover Mother." LOL.

On our family list of 'Fortunate' she is the most powerful! https://t.co/XWi5m1aFzg

AbRam is the youngest of Shah Rukh Khan and Gauri Khan's three children whereas Karan Johar welcomed Roohi and Yash via surrogacy in 2017. Roohi and Yash are often spotted hanging out on play dates with AbRam, almost 6.