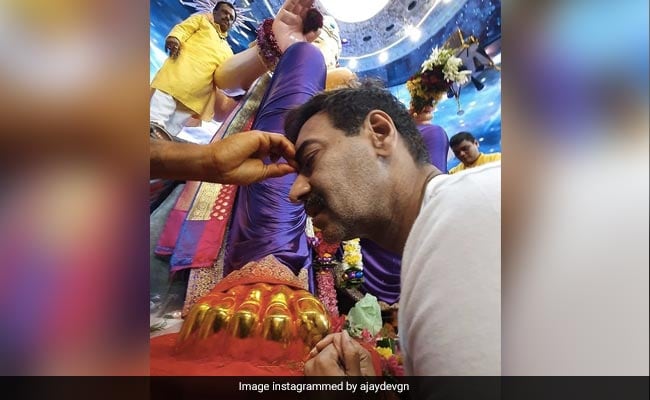 Ajay Devgn, on Friday, decided to celebrate Ganesh Chaturthi by sharing memories from the festival on his social media profile. While several curbs will be strictly imposed in Mumbai (including Section 144 of the criminal procedure code between September 10 to 19), the best way to begin the festivities was to stay at home and cherish old memories. The actor posting the throwback picture, wrote on social media: "Lord Ganesha is the harbinger of all things good-peace, prosperity, progress, happiness and health. Let's join our hands in prayer to welcome our favourite deity today. Ganpati Bappa Morya.#HappyGaneshChaturthi #ThrowbackToLalbaugDarshan."

In terms of work, Ajay Devgn has several projects lined up. This includes extended cameos in the films Sooryavanshi, Gangubai Kathiawadi and RRR. In addition to this, he will also be seen in Maidaan and Thank God, among others. The actor has also begun shooting for his digital debut series Rudra - The Edge of Darkness.

Besides that, Ajay Devgn will be directing Mayday, starring Bollywood veteran Amitabh Bachchan. The film also stars Rakul Preet Singh. Ajay has worked with both the actors previously. He was last seen in Bhuj: The Pride Of India.