Ganesh Chaturthi 2018: Aishwarya Rai Bachchan And Aaradhya's Pic From The Celebrations Will Make Your Day 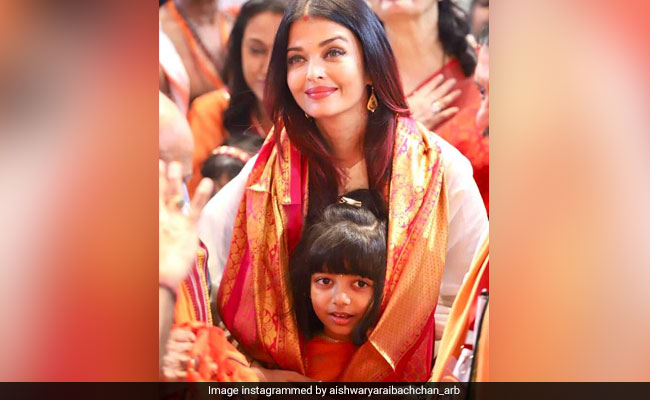 Ganesh Chaturthi celebrations are in full swing and Aishwarya Rai Bachchan is celebrating the festival with her daughter Aaradhya. On Monday, Aishwarya shared a picture of herself and her little munchkin Aaradhya on her Instagram profile and cute can't even begin to describe it. In the picture, Aishwarya, dressed in a saree can be seen smiling at the camera as Aaradhya embraces her. The former beauty queen wrote: "Me and mine at Ganpati Darshan." Needless to say, the mother-daughter's picture received lots of love from fans and over 3 lakh likes on Instagram. The comments section was flooded with remarks such as "What a serene picture" and "cuteness overloaded."

Me n Mine at GSB Ganpati Darshan.

A post shared by AishwaryaRaiBachchan (@aishwaryaraibachchan_arb) on Sep 17, 2018 at 12:17am PDT

Aaradhya frequently features on her mother's Instagram profile. Earlier this month, Aishwarya Rai Bachchan collected the Meryl Streep Award for Excellence at the first edition of Women In Film and Television (WIFT) India Award along with her daughter. She shared pictures from the ceremony and wrote: "You my Aaradhya complete me. Divine Blissful Eternal love."

You my Aaradhya complete me Divine Blissful Eternal LOVE

A post shared by AishwaryaRaiBachchan (@aishwaryaraibachchan_arb) on Sep 9, 2018 at 1:24am PDT

A post shared by AishwaryaRaiBachchan (@aishwaryaraibachchan_arb) on Sep 9, 2018 at 12:34am PDT

Needless to say, Aishwarya shares a very special bond with her daughter and is frequently seen documenting her love for Aaradhya not only on social media but also during interviews. In an interview with news agency IANS earlier this year, Aishwarya said that for her, Aaradhya comes first and "everything else in secondary". She told IANS: "Of course, after Aaradhya my priorities have changed completely. She comes first, everything else is secondary."

Aishwarya Rai Bachchan and Abhishek Bachchan got married in April 2007 and they welcomed daughter Aaradhya on November 16, 2011.