Game Of Thrones: All The Times Jon Snow Nearly Died (And The Time He Did), Ranked

Jon Snow managed to escape unscathed as usual, when he nearly died not once but twice in the latest episode of Game Of Thrones season 7 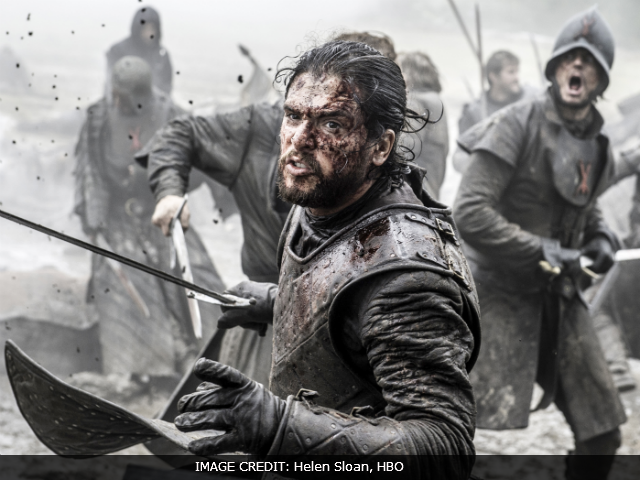 Washington: During Sunday night's nail-biter Game of Thrones episode, Jon Snow nearly died not once but twice. As usual, he managed to escape (somewhat) unscathed.

That's kind of his M.O., isn't it? He narrowly escapes death when someone or something swoops in at just the right moment to rescue him. The guy is lucky to have some friends with great timing. It probably doesn't hurt that the Lord of Light appears to be on his side, too.

In honor of his most recent brushes with death, here's a look at all the times he nearly kicked the bucket - and the one time he actually did - ranked from least to most dicey.

- That time the acting Lord Commander wanted to execute him

When Jon returned to the Night's Watch after working as an undercover spy embedded with the wildlings, those in charge at Castle Black questioned his allegiance. He had, after all, killed his brother in arms, Qhorin Halfhand - though that was Halfhand's idea - and he also "lay with a wildling girl." So he'd broken his vows.

"The law is the law," the weaselly Janos Slynt commanded. "The boy must die."

But Maester Aemon, ever the voice of reason, piped up, "If we beheaded every ranger who lay with a girl, the Wall would be manned by headless men."

Acting Lord Commander Alliser Thorne said there was a difference between going to a brothel and getting busy with the enemy. Jon responded with a rousing speech about the wildling threat - riddled with a few well-placed Janos Slynt put-downs - and then asked if he'd be executed. But before Ser Alliser could respond, Maester Aemon jumped in and said that Jon would live to see another day (not to mention the executions of both Slynt and Thorne).

After the Battle of Castle Black, Jon ventured north for a bargaining session with Mance Rayder - at least that's what he said. Really, he planned to assassinate the King Beyond the Wall. Mance is no dummy, though, and when Jon kept glancing at a knife across the room, the wildling saw through the scheme. Now Jon was in a precarious place, alone and far from Castle Black, surrounded by wildlings with a knife at his throat. And just then: the sound of a bugle in the distance.

What do you know? Stannis Baratheon had arrived to break up the party. Outnumbered, Mance was forced to surrender, and Stannis escorted Jon back to the Wall.

- That time he was outnumbered by wights

Saved by: Daenerys Targaryen and Drogon

Luckily, when the attack began, Jon had the presence of mind to send Gendry to the Wall and alert those at Dragonstone. Somehow, Gendry managed to sprint back and send a raven, then Daenerys had time to hop on Drogon and fly north and still have a few milliseconds to spare before the men were toast. Even though Jon didn't end up airborne with the rest of the survivors, Daenerys did beat back the wights enough to save Jon momentarily from the onslaught - until he fell through the ice and slipped beneath the water.

- That time he was hypothermic - but also outnumbered by wights

Jon managed to pull himself out of the freezing water, grab his sword Longclaw - which was conveniently waiting for him on the ice ledge - and start limp-jogging toward safety. He wasn't going to make it far, though, what with all the wights that had noticed him and were headed his way.

Just when it seemed hopeless, Jon's half-dead uncle and frequent Stark-kid savior Benjen appeared with a flaming ball and chain. He put Jon on his horse and sent them south to Eastwatch before going back into the fray where he most likely became at least one-third more dead.

- That time a White Walker singled him out

Hardhome was a battle to remember. It was the first time Jon saw the Night King raise people from the dead, not to mention the first time he came face to face with a White Walker. Jon made yet another questionable decision that day - to double back to the town hall for a cache of Dragonglass despite an onslaught of wights - and almost immediately regretted it. Inside the building, he met a terrifying White Walker who seemed invincible. The first sword Jon picked up disintegrated the moment it made contact with the enemy.

Wounded, Jon managed to limp outside where he retrieved his Valyrian steel sword, Longclaw. When he swung it, both he and his opponent were shocked that it stayed intact when it struck the Walker's ice sword. Better yet, when it struck the undead man himself, the White Walker shattered into pieces.

- That time Ygritte shot him with three arrows

Saved by: The Night's Watch (and one fast horse)

When Jon's wildling girlfriend Ygritte found out he was still loyal to the Night's Watch, she was not pleased. Jon assumed his favorite plucky warrior was going to let him go back to Castle Black, anyway.

"I know you won't hurt me," he said, which she answered with her usual refrain: "You know nothing, Jon Snow."

The moment he turned to leave, Ygritte shot him in the back with an arrow. He was shocked for a moment before regaining his wits, which he was going to need since she was quickly reloading her bow. He managed to hop on his horse and start riding away but not before Ygritte tearfully landed a couple more shots. He was on the brink of death by the time his horse magically delivered him to the gates of Castle Black where the Night's Watch nursed him back to health between seasons.

- That time he led his army into a trap

Saved by: Sansa and the Knights of the Vale with the help of - hate to admit it - Littlefinger

For a king, Jon makes a lot of terrible decisions. One was taking Ramsay Bolton's bait during the Battle of the Bastards. After Ramsay made a show of murdering Rickon Stark, Jon lost his temper - even though Sansa had just warned him about Ramsay's treacherous mind games - and charged the Bolton army by himself. It didn't take long for his horse to get hit by arrows, leaving him standing alone in a field with an enemy army storming toward him. Luckily (for him, anyway) his army followed and caught up just in time. That was the first time he almost died that day.

Later, the Stark forces became trapped. On one side, they were hemmed in by a pile of bodies, while a horseshoe-shaped phalanx of Bolton men with shields and spears slowly closed in. During a chaotic stampede, Jon ended up suffocating under a pile bodies, both living and dead. He managed to claw his way out just in time to survey his stunning defeat. But just then - hey, what's that sound?

Why it's the Knights of the Vale, arriving just in time to turn the tides. Thanks, little sis!

- That time he was stabbed by his own men

Saved by: Melisandre with an assist from the Lord of Light

Ser Alliser Thorne, the man who once wanted to execute Jon Snow, eventually got his wish. He was part of a mutiny that rose up after Jon, as Lord Commander, allowed wildlings south of the Wall. After Thorne lured Jon outside, a parade of men (and one boy) took turns stabbing him and saying, "for the Watch." There was no mistaking the final image of the episode - unless you were desperately looking for some glimmer of hope. Jon, laying in a pool of blood with eyes wide open, was dead.

But he didn't stay dead long. Ser Davos asked Melisandre if she knew of any magic that might help bring Jon back to life. She was reluctant, having entirely screwed up her prophecies about Stannis Baratheon being the next king.

"Everything I believed, the great victory I saw in the flames, all of it was a lie," she said. Besides, she didn't have the gift to reanimate a corpse.

"Have you ever tried?" Ser Davos asked.

With that, she went to the room where Jon's lifeless body rested on a wooden table for a couple episodes and performed her ritual. It worked. With the snap of his eyelids and a giant gasp, the Lord Commander lurched back to life. You'd think his beyond-death experience would inspire him to take some extra precautions, but you'd be wrong. He can't seem to help himself.