Game Of Thrones 8: What To Expect In Episode 5, Starting With The Final War

This episode will be all about tension. The question is: Will a climax be reached? 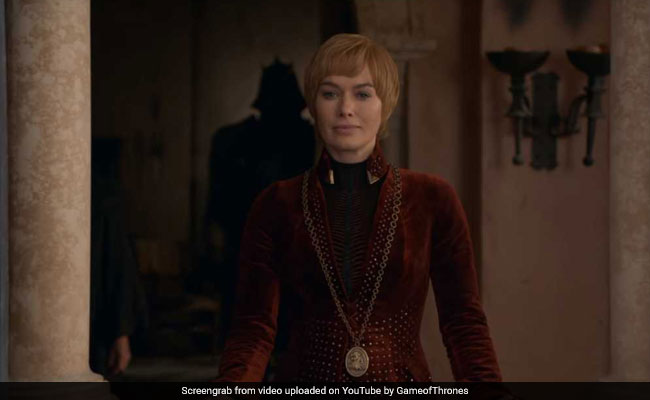 (EDITORS: As always, this post contains a multitude of spoilers for Game Of Thrones. Otherwise, it would be very short.)

If the teaser for this week is any indication, this could be another explosive second-to-last chapter. It's the first teaser of the year that features no dialogue, a significant omission that hints this episode will not just be filled with people in rooms talking.

The last teaser, which preceded a table-setting episode, featured only a few sentences from Daenerys.

"We have won the great war. Now we will win the last war," she said, before adding a line about Cersei: "We'll rip her out, root and stem."

The ripping out didn't go so well, as Missandei could attest to, if she still had a head. Aside from the loss of her interpreter and friend, Dany lost several fleets, and Rhaegal the dragon got killed. But perhaps things will change, because it looks like a battle is a-brewin'.

The teaser opens with a dark and sorrowful shot of Daenerys standing at one of the large open windows decorating the throne room at Dragonstone. She stares out across the water, presumably mourning her lost dragons, while Tyrion walks up slowly, wearing a grim face.

According to the closed captioning, "(TENSE MUSIC PLAYS)" Then we get the "Next on Game Of Thrones screen, accompanied by "(CLOCK TICKING) ."

In other words, this episode is about tension. The question is: Will that tension be ratcheting up, or will a climax be reached?

The rest of the teaser shows various shots of characters preparing for battle. First, Cersei looks out over King's Landing from her castle, a wry grin on her face. (Then again, when is a wry grin not on her face?) As that clock keeps ticking (reminding one of the clock from Rosemary's Baby), we see what Cersei is probably looking at: the armies of the North.

There, outside the castle walls, stand Jon Snow, Davos and Tyrion - along with all the remaining Dothraki and Unsullied forces. The armies have indeed traveled south to King's Landing, taking no time for R&R other than one drunken night in a tavern that apparently serves fresh-brewed Starbucks. 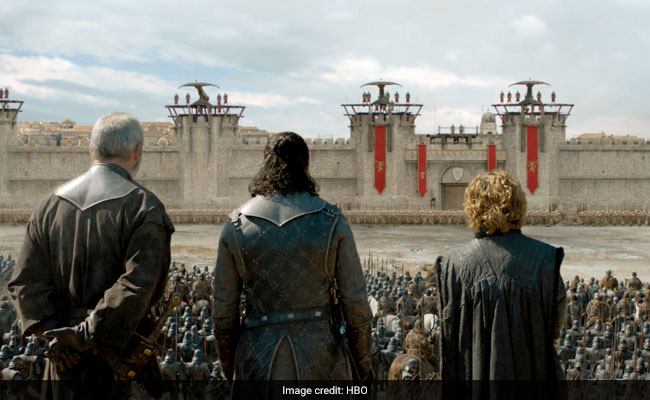 A still from Game Of Thrones 8. (Image credit: HBO)

Jon's face then takes center screen. The close-up reveals a man who looks incredibly worried. This is not the resolute Jon we saw when it was time to take on the Night King. This is a Jon who knows something about this isn't right. It doesn't bode well.

Interspersed with shots of Euron's fleet and Cersei's armies marching through the streets of King's Landing, we see a split-second shot of Tyrion standing in the Dragonstone throne room, again with a grim look on his face. It appears that Dany stands before him at her ancestral home.

The teaser ends with Euron loading a giant projectile into a scorpion, the weapon he used last episode to kill Rhaegal. We hear what appears to be screeching as Euron shields his eyes and looks to the clouds, but the close captioning doesn't identify said screeching. (Hmmm!)

We know a battle is coming, so none of this is particularly surprising. Perhaps what's most interesting is what isn't shown. Namely, we don't see Daenerys near King's Landing. We also don't see her with anyone other than Tyrion (who we know travels between Dragonstone and King's Landing at some point in the episode).

Maybe, overcome with grief, Dany decided to sit her final battle out, to command her armies to die for her from afar.

Other omissions include Arya, Sansa, Bran and Jaime. Last episode left many of their story lines hanging in the balance, but they're nowhere to be found here. That might be meaningless and they'll have as much face time as anyone. But these teasers have been pretty good predictors of the episode to come, and it looks as if there will be a lot of standoffs between armies - and maybe even a battle.

(Except for the headline, this story has not been edited by NDTV staff and is published from a syndicated feed.)
Comments
game of thrones 8