Game Of Thrones 8: The Most Ridiculous Moments From The Battle Of Winterfell 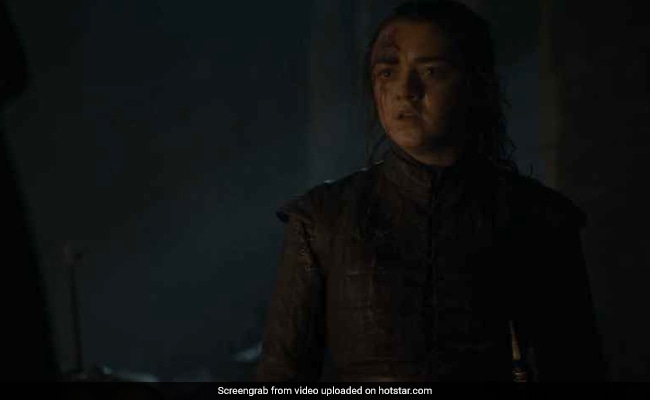 A still from Game Of Thrones 8. (Image courtesy: Hotstar)

This post contains a multitude of spoilers for all seasons of "Game of Thrones." Otherwise, it would be very short.

Whew! Something about battling the seemingly never-ending army of the undead really takes it out of you. Now that Jon Snow has screamed at an ice dragon zombie, Samwell Tarly has cried a Narrow Sea's worth of tears, the Night King has lost his 10,000-or-so-year-long war against the living, and we all have added 20 years of strain to our eyeballs, we're finally coming down from the great Battle of Winterfell.

And, boy, do we have some questions. There was a lot to celebrate about Sunday's episode - Arya, we're looking at you, girl - but there was even more to question. Because a lot of that made, like, no sense. So here are the most ridiculous moments from The Long Night. (And we're just going to skip over the whole we-couldn't-see-a-thing-because-someone-forgot-to-put-the-flash-on aspect of the episode.)

Did all the famous characters drink Felix Felicis or something?

Seriously, was this a Harry Potter crossover episode? For those who don't know, Felix Felicis is a good luck potion from J.K. Rowling's world - and it sure seems like all the main Game of Thrones characters drank it on Sunday. I mean, how many times did we see characters being saved at the last second by a buddy chopping the head off a wight? Here's a shortlist: Almost all of them.

Samwell has multiple (absurd) close-calls that involved a wight literally climbing on him, yet the undead didn't even manage to maim the bookworm. Brienne and Jaime both consistently looked like they stepped in ant piles, if ants were reanimated human corpses. A dragon waited a second too long to blow off Jon Snow's head, and Jorah appeared out of nowhere to save a helpless Daenerys and complete his journey as the lovelorn best friend.

Thousands upon thousands of people died. Some died, rose up and died again! But not one A-character bit the dust. NFL games end with more injuries to the starters than this supposed great battle did.

Fans of the old Hollywood trope of thinking someone is doomed only to have an off-camera hero kill the bad guy at the last second probably loved this episode. The rest of us are scratching our heads.

So much of Game of Thrones is predicated on the idea that dragons are the most powerful weapon to ever exist. They're the reason Aegon Targaryen was able to conquer Westeros in the first place, and they're supposedly why Daenerys will do the same.

But in Sunday's battle, they seemed . . . fine? They definitely helped fight back the hoards, and they were certainly more useful than the flaming-sword-carrying Dothraki. But the Night King summoned some clouds and, in the words of Emeril Lagasse, BAM! They couldn't see a thing, and the Red Woman had to supply more fire.

Plus, when the moment came, and Drogon covered the Night King in flames . . . Nothing . . . happened. Nothing except the Night King smiling, probably the one bit of emotion he's shown in this entire series.

Dragons are obviously useful, but they didn't seem like the nuclear option we've come to expect. Let's not forget, by the way, that one was killed by an ice javelin last season.

Speaking of dragons, what on earth were Jon and Dany doing the whole time?

Aside from flying around in airspace with zero visibility and occasionally running into each other. The original plan, of course, was for them to keep an eye out for the Night King, using Bran as bait. But when that went awry, it didn't seem like they adjusted too quickly. I'm sure flying on the back of a dragon is fun, but maybe this wasn't the time!

Arya's presumably going to sign up for the Olympics, right?

Let's just skip over the fact that she didn't bother telling a very confused Hound, who had just saved her life, where she was going when she Usain Bolt-ed from the castle. We know that she gained the skills of an assassin from her time in the House of Black and White.

That being said, how fast is Arya? She got to Bran in minutes and was in such control of her breath and her steps that somehow none of the White Walkers, wights or the seemingly omniscient Night King himself (who can supposedly see through Bran, or so we thought) noticed. It was an impressive scene, sure, but talk about deus ex Arya.

Cool trick, Bran, but was this really the time?

Bran spent most of the episode in the head of a raven, but he didn't relay what he saw to anyone? There isn't really much more to say here that can be politely printed in a family newspaper. But basically all he did was tell Theon that he's a good dude and give him a look that said, "Thanks for dying."

So, uh, that's, like, it for the White Walkers? Why did they do anything they did?!

One of the most frustrating aspects of Game of Thrones is the fact that we spent so much time learning every random human's motivation while never gaining any true insight into the Night King's inner psyche - if he even had one. Aside from finding humor in the fact that dragonfire can't burn him alive, he was an empty vessel.

And that would be fine enough if so much of the series didn't hinge on his existence, but it does. At least, it did. After seven and a half seasons worrying about the Night King and the battle to come, he's just gone. Poof. We never learned what he wanted or why he was so seemingly hellbent on destroying Jon Snow. We never learned if he actually wanted anything or was marching on instinct.

It seems the Night King was just a MacGuffin all along. What a bummer.