From Transgressive To Trope: 'Difficult' Women Are Decidedly In

Will this year's fiercely capable heroines make us more willing to accept female power, or more frightened of it? 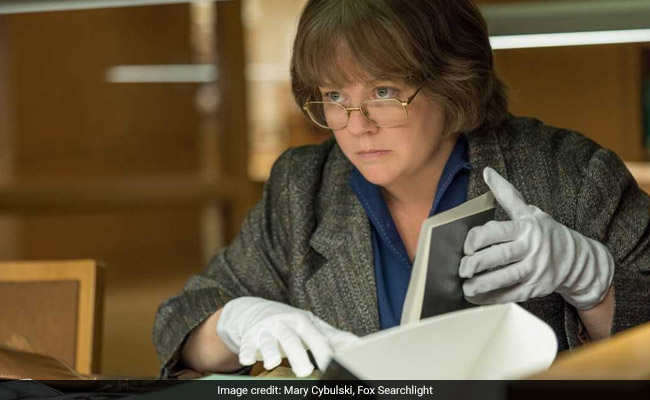 Melissa McCarthy in Can You Ever Forgive Me? (Image courtesy Mary Cybulski, Fox Searchlight)

More cynical than the bleakest House of Cards episode with twice as many deliciously nasty zingers, The Favourite is just the latest sprout in a bumper crop of movies depicting women, if not at their best, then at least in some form of sisterly solidarity: From the depraved sisterhood of Suspiria to Viola Davis coolly leading a team of henchwomen in Widows, 2018 is shaping up to be a year singularly devoted to the vicarious pleasures of feminist troublemaking.

Throw in such tough protagonists as Emily Blunt in A Quiet Place, Jamie Lee Curtis in Halloween Melissa McCarthy in Can You Ever Forgive Me? and Rosamund Pike in A Private War and the trend is clear: Good girls are Out. Difficult women - preferably ones who can defy social expectations to drink, swear, misbehave and screw up a storm - are decidedly In.

In the not-too-distant past, we saw Charlize Theron's gorgeously androgynous Furiosa in Mad Max: Fury Road or Frances McDormand's fierce, foulmouthed, Oscar-winning turn in Three Billboards Outside Ebbing, Missouri as galvanizing outliers, their grim machisma a welcome antidote to the hypersexualized or tiresomely passive roles usually on offer from Hollywood.

Now, what was once transgressive has become a trope: Just wait until you get a load of Nicole Kidman playing a bruised, beat-up-looking alcoholic in Destroyer or Natalie Portman's unattractive and unrepentant diva in Vox Lux. In the upcoming films Ben Is Back and Vice as well as Private Life currently playing on Netflix, even conventional wife-and-mother roles come spiked with generous doses of spiky anger or quiet political maneuvering.

Interestingly, many if not most of these movies were conceived and green lighted a few years ago, when their producers no doubt thought that they'd be perfectly timed to celebrate America's first female president. Not only did that not come to pass, but the Harvey Weinstein scandal and #MeToo movement completely upended the context in which they're being received. "Is (that) connected to how we are getting our stories told now?" Rachel Weisz reflected in an interview with five other actresses in the Hollywood Reporter this week. "I can't figure out the chicken and the egg."

That confusion extends to the mixed messages of the content itself. Seen through one lens, Vice can be commended for giving Lynne Cheney her due as a scholar and ambitious conservative ideologue in her own right - not to mention the figure behind the transformation of Dick Cheney from a dissolute, unfocused young man to vice president. Similarly, the women of The Favourite prove themselves to be capable of pragmatism and shrewd gamesmanship, even as they go along with the farcical notion that the men are in charge.

The filmmakers are confident that viewers will be in on the joke. But, as delicious as these characterizations can be, they also perpetuate notions of "subversiveness" that are relegated to whispered asides and neurotic machinations, with strategy reduced to scheming, process to petty manipulation. Face it: Simple professionalism, competence and skill are rarely deemed sexy enough to qualify as entertainment.

Then again, perhaps that contradiction is utterly of a piece with a time when the American public - especially men - still report discomfort with the idea of a female president, and when women account for a vanishingly small number of corporate leaders.

Will this year's fiercely capable heroines make us more willing to accept female power, or more frightened of it? It's hard to figure out the chicken and the egg. For now, it's clear that we've gotten the cinematic trope this era deserves, one that encapsulates aspirations and ambivalence in maddeningly equal measure.