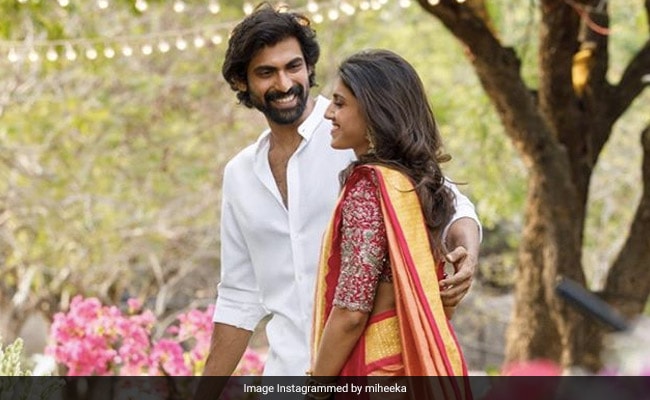 It's raining love on our Instagram feeds, courtesy the newly-engaged couple Rana Daggubati and Miheeka Bajaj. The couple shared pictures from their low-key albeit dreamy engagement ceremony on their respective Instagram profiles on Thursday morning. Miheeka Bajaj shared multiple photos on her Instagram profile, each with an equally adorable caption. Miheeka announced the big news in the sweetest way possible and wrote: "To the beginning of forever." Rana's cousin and food blogger Aashritha Daggubati commented on Miheeka's post. She wrote: "I can't contain my happiness." In a separate comment, she wrote: "Can't believe I'm not there. Sending you two the biggest hug." Sonam Kapoor's husband Anand Ahuja wrote: "Whoa whoa! Yay."

In a separate post, Miheeka Bajaj defined her fiancé Rana Daggubati as her "happy place." Rana and Miheeka's ear-to-ear grins in the photographs clearly express their happiness.

For their engagement, Rana Daggubati wore a white shirt and a matching veshti, while Miheeka complemented him in an orange saree. She accessorised her look with a statement necklace and bangles. Sharing the pictures from the engagement, Rana wrote: "And it's official" and added firework emojis.

Rana Daggubati's father Suresh Babu spilled the beans on the couple's wedding plans and told Times Of India that Rana and Miheeka will be having a December wedding. "We were thinking of having it around December but it could happen even sooner than that too. We will reveal the details once things are finalised," he said.