Rashmika Mandanna, who plays the female lead in the film, looks amazing in her never-seen-before look from the film 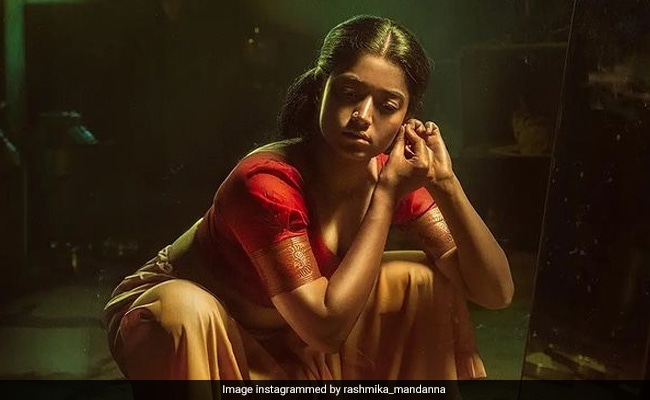 Pushpa: Rashmika Mandanna on a poster of the film. (Image courtesy: rashmika_mandanna )

Finally, the wait is over. Yes, we are talking about Rashmika Mandanna's first look poster from Allu Arjun's Pushpa. The actress, on Wednesday, shared her first look as Pushpa's love interest Srivalli in the Sukumar-directed film and sent the Internet into a tizzy. Rashmika Mandanna, who plays the female lead in the film, looks amazing in her never-seen-before look. She can be seen sporting a traditional outfit and wearing an earring in front of a mirror - a plate with a saree and what appears to be a floral headband is kept in front of her. The background in the poster shows the story of Pushpa, in which Allu Arjun plays the titular role, is set in a rural town.

Sharing the poster, Rashmika Mandanna wrote "Srivalli" with a fire and a red heart icon.

Check out the poster of Pushpa: The Rise here:

Pushpa is co-produced by Mythri Movie Makers and Muttamsetty Media. It will release in five languages - Telugu, Tamil, Hindi, Malayalam and Kannada. It has been reported that Allu Arjun plays a sandalwood smuggler while Rashmika features as his wife in the film, which is reportedly based on real-life incidents about the red sandalwood smugglers in Andhra Pradesh's Rayalseema.

The film will release on Christmas this year.

Rashmika Mandanna started her career as a model for a Clean &Clear, from where the makers of Kirik Party selected her for the lead role opposite Rakshit Shetty. She is known for her performances hits like Kirik Party, Geetha Govindam, Sarileru Neekevvaru, Bheeshma, Pogaru and Sulthan.

Asked If She Is Moving To Mumbai, This Is How Samantha Ruth Prabhu Reacted