"I'm very proud of all the hard work that has been poured into this project., " wrote Chris Hemsworth 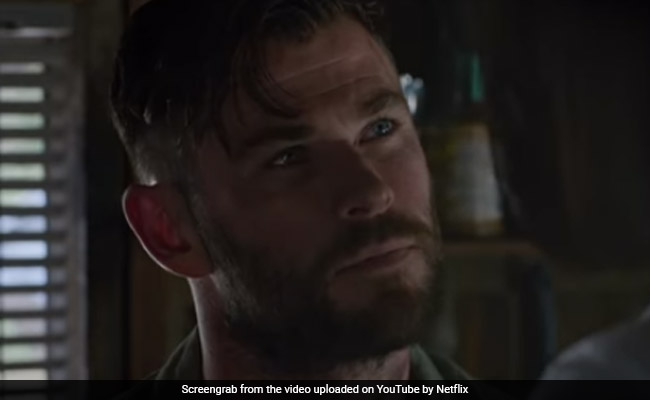 Chris Hemsworth in a still from the trailer of Extraction. (Image courtesy: Youtube)

The official Youtube channel of Netflix dropped the trailer of its upcoming film Extraction on Tuesday, and it has grabbed a permanent spot on the trends list since then. The trailer of the crime-thriller features a star-studded cast - Chris Hemsworth, Pankaj Tripathi, Randeep Hooda, Golshifteh Farahani and many more. Giving us a glimpse of the storyline that revolves around weapon dealers and drug traffickers, the three-minute trailer led by Chris Hemsworth and Rudhraksh Jaiswal is a sneak peek into the underworld of India and Bangladesh.

Set in the underworld of weapons dealers and traffickers, Extraction follows a mercenary for hire named Tyler Rake (played by Chris Hemsworth) who is paid to rescue the kidnapped young son Ovi (played by Rudhraksh Jaiswal) of a Bangladeshi businessman and crime lord (played by Priyanshu Painyuli). With Dhaka in the backdrop, the trailer also gives us a glimpse of how Ovi becomes a pawn in the game of trafficking. The trailer also shared a glimpse of Pankaj Tripathi behind the bars, Godshifteh Farahani over the phone giving orders to Chris on further actions and Randeep Hooda for a split second.

Taker a look at the trailer here:

Sharing the trailer on his Instagram profile, Chris Hemsworth wrote, "So happy to finally be able to share the trailer for Extraction with you. I'm very proud of all the hard work that has been poured into this project. This has been a difficult few months for all of us, and we hope this will provide a bit of entertainment while we are all staying home. Check it out April 24 on Netflix."

Directed by Sam Hargrave, Extraction will release on Netflix on April 24. The film also stars Marc Donato, Fay Masterson, Derek Loke and others.