Eeb Allay Ooo! Review: The Actors In This Social Satire Are So Real They Don't Seem To Be Acting

Eeb Allay Ooo! Review: Shardul Bhardwaj is spectacular. He delivers a poignant portrayal of a young man who must cling to his sanity even as his simian acts take him away from his humanity. 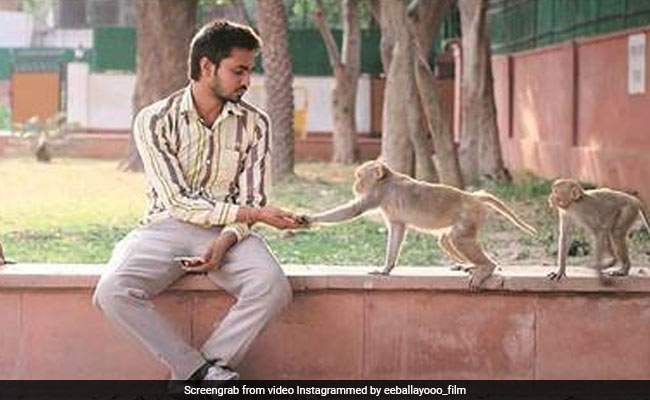 (Eeb Allay Ooo! is part of the Jio MAMI Mumbai Film Festival's programming for the digital We Are One Global Film Festival (May 29-June 7, 2020), for which 20 more of the world's top festivals have curated titles)

Achieving the elemental power of the guttural cry aimed at scaring away monkeys - the shrill syllables give the film its title - is a tough call for the migrant-protagonist of Prateek Vats' trenchant social satire Eeb Allay Ooo!, a film that uses precise pin pricks, rather than hammer blows, to make its point about the plight of the thousands of faceless men and women who arrive in Delhi every day and disappear into the city's fringes in search of work and sustenance.

A recent addition to the population of Delhi, the wet-behind-the-ears principal character just cannot figure out how to get the sounds out with the required force. He lacks the gall and guile to make a fair fist of the job that he has landed. His mind understands what he is here for, but his heart doesn't go along.

Only somebody who is accustomed to replicating langur sounds, like real-life monkey-repeller Mahinder Nath, whose family has worked with the black-faced primates for seven generations, can whoop out "eeb allay ooo" with the raspy quality needed to have the desired effect.

Think like the monkeys that rule Raisina Hill, Mahinder (playing himself) advises the struggling Anjani (Shardul Bhardwaj). You are withholding a key trick from me, the understudy complains. Mahinder explains to Anjani that the secret lies in using the lungs. The young man isn't cut out for it.

Vats' remarkably self-assured directorial debut presents a portrait of a city that draws workers from around the country in droves and then proceeds to suck the life out of them as they struggle to find a footing in a heartless environment. Anjani, despite the unusual calling he is pushed into, isn't unlike all the others who lose their dignity and identity in India's exploitative cities that are forever on the lookout for cheap labour.

Anjani lives in a cramped shack in a congested east Delhi locality with his pregnant elder sister (Nutan Sinha) and brother-in-law (Shashi Bhushan). The former makes packets of spices and snacks for a distribution agent; the latter is a night-shift security guard at an amusement park. The couple has been in Delhi for years now but they continue to languish on the wrong side of the tracks. Literally. People in the area they reside in have to cross the rail tracks to get to town and to return home.

Eeb Allay Ooo! is about an outsider struggling to fit in. It takes into its sweep an unchanging system that thrives on manipulation from the level of the bureaucrats down to the contractors and the foot soldiers they contractually press into service. Kahaan narak mein laake phansa diya, Anjani says to Mahinder in one scene. In another, Anjani tells his sister he does not want to do the job of a monkey-repeller. She gives him a piece of her mind.

Sitting on the ramparts around New Delhi's Secretariat Building, Anjani is reminded by Mahinder that the mild winter sun and the bracing breeze - it is January, Republic Day is around the corner - are misleading. Achcha lag raha hoga, Mahinder says, but this is only a reverie. That is an understatement. A full-fledged nightmare awaits Anjani as he tries to come to terms with the demands of the job.

Every move that the man makes to ease his path lands him in increasingly serious trouble with the contractor, Narayan (Nitin Goel). The only joy Anjani seems to have is in the form of Kumud (Naina Sareen), a nurse in a gynaecologist's clinic and his next-door neighbour. But like everything else in Anjani's life in Delhi, the relationship is beset with uncertainty.

Whether he is on the wide, bright and leafy avenues of central Delhi chasing monkeys or in the soul-crushing confines of the lanes and spaces of Sanjay Amar Colony - both of which are captured with great acuity by cinematographer Saumyananda Sahi - Anjani is always on the backfoot. He rarely succeeds in sending the monkeys scurrying. At home, he is frequently berated by his sister for the stink he carries home from his hours in the sun or is taken to task by the brother-in-law for making a hash of the work he has been hired for.

The city or the nation has no time or inclination to worry about the likes of Anjani. Let nationalism fill you heart, a voice grandly announces as the R-Day parade unfolds. A celebratory song evokes the pride of living "sone ki chidiya ke desh mein", while another announcer exults over the fact that people from every corner of the country have thronged Rajpath for the celebration of the Republic, braving the winter chill. Anjani stands by staring at the sky as fighter jets perform a fly-past.

The city is alien. The job is even more so. In one scene, as NDMC personnel assemble an iron cage to trap monkeys, they play a prank on Anjani. They bolt the shutter even as Anjani is inside the coop. He pleads with them to let him out. They throw bananas into the cage. Eat like a monkey, they mock him. The workers stand around laughing as Anjani gasps for breath.

His brother-in-law, instrumental in getting Anjani a 'government' job, is no better off himself. His employers provide him with a rifle and link it to a Rs 1500 raise. His wife will have none of it - she believes a gun will bring bad luck for the baby that is on the way. The guard asks the amusement park manager if he can do his job without a weapon. The boss takes him on a ride on a carousel to discuss his future. Groggy, he throws up.

In another scene, and we are just a little over one-third into the film at this point, the cinematographer creates one of the defining images of Eeb Allay Ooo! and Anjani isn't in it. The brother-in-law sits on the steps of a pool smoking. The camera captures his reflection in the gently rippling water. We see the man upside down. And that is the perfect visual representation of the state of migrants in our cities.

They are lured into a trap, smothered and crushed mercilessly by an endless cycle of apathy and mistreatment. We see them reflected in everything that our class-conscious, caste-ridden society does, but we choose to ignore them. Eeb Allay Ooo! holds up a mirror to that reality.

A review of Eeb Allay Ooo! would be incomplete without lauding the brilliance of the actors, who are so real that they never appear to be acting. Shardul Bhardwaj is, to put it in one word, spectacular. He ventures into a role that has no known reference points and delivers a phenomenally convincing and poignant portrayal of a young man who must cling to his sanity even as his simian acts take him further and further away from his humanity.

The supporting cast, made up principally of FTII alumni, is equal to the task of sustaining the naturalistic tone of the film. Nutan Sinha, Shashi Bhushan, Naina Sareen and Nitin Goel are actors we would love to see much more of.

And need we even say that we will be keeping an eye out for Prateek Vats' next film?