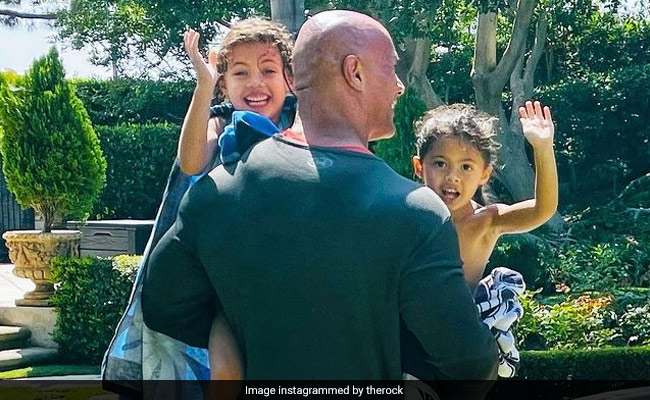 Dwayne Johnson is extremely popular for his larger-than-life roles on screen. The Hollywood star, who is fondly called “The Rock” by his fans, is also loved for his affable personality off-screen. His interactions with fans on social media as well as his posts stand as a testament to this. Now, the Jumanji star has won the Internet over with a picture of his fun day in the pool. And, we have to admit that much of the credit that is coming Dwayne Johnson's way for the cute photo is thanks to his children who make an appearance.  In the image, Dwayne Johnson is carrying his daughters Tiana Gia Johnson and Jasmine Johnson in his arms. With the caption, Dwayne Johnson let us in on some of the fun the trio had. He wrote, “Fun pool day. Which equates to “daddy jump in but you're not allowed to take your shirt off, so catch yourself a farmer's tan around your neck and then you have to carry us everywhere because the grass is lava”.”

He added, “Life is good today, hands full.” And to describe himself and his two children Dwayne Johnson used the hashtag, “2 tornados and a beast”. Fans of the superstar fell in love with his doting dad avatar and made this evident with a bunch of responses in the comments section.

See the image here and get ready to go “aww”.

Previously, Dwayne Johnson has shared another image with his daughter Tia. In the picture, the little one is seen clinging to The Rock's arm. Giving us a glimpse of their “weekend breakfast vibes”, the actor wrote, “These days Tia loves “hiding” behind daddy. But there's gonna be a time when she gets older where daddy's arm is the last and un-coolest place she will  want to be so I will take these moments 24/7.”

He also gave fans some trivia about his tattoo that is seen in the image. The actor wrote, “Fun irony is she's hiding behind the part of my tattoo where it tells the story (symbolically) of protection. Always protecting my AIGA (family).”

We also love this picture of Dwayne Johnson enjoying breakfast with his little girls. “Beautiful weekend breakfast with my favourite ladies watching A Quiet Place,” he wrote in a sweet caption.

Dwayne Johnson is married to singer Lauren Hashian. He is known for his roles in The Scorpion King, The Mummy Returns, G.I. Joe: Retaliation, Hercules, San Andreas, Fast and Furious, and Jumanji, among others.