Drishyam 2 Review: Mohanlal is flawless yet again as the husband/father who will stake his all to keep the police at bay. The other actors in the cast, especially Murali Gopi, pull their weight. 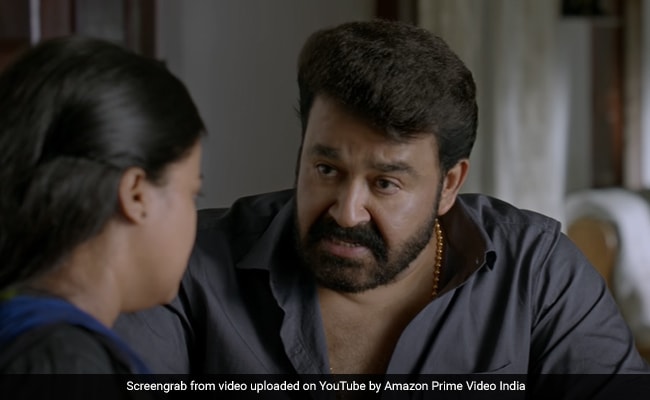 Drishyam 2 Review: A still from the film. (Image courtesy: YouTube )

Mohanlal is back as the unflappable Georgekutty. The character has evolved perceptibly since we last saw him. The veteran actor imparts subtle strains of novelty to the man who will stop at nothing to shield his family from the law. However, familiarity breeds blandness. The sequel to 2013's Drishyam is disappointingly tepid.

Georgekutty's intelligence and resolve are still intact. So, his wife and two daughters are out of harm's way. But the cops believe that it was luck, not his acumen, that helped him pull off a daring cover-up of an inadvertent murder. It is only a matter of time, they believe, before he and his family are brought to book.

But like it has done for the investigators - the protagonist has been scot-free for six long years - time feels a tad stretched in the Amazon Prime film because large swathes of it linger in the realms of the obvious.

Georgekutty now owns a movie theatre. His old jeep has made way for an SUV. His younger daughter Anu (Esther Anil) is in the best English-medium school in town. And, determined to produce a film to fulfil a long-nurtured ambition, he has sunk a million and a half rupees into developing a script. But is his plan to bankroll a movie a mere innocuous whim or is there more to it?

The answer to that question forms the core of Drishyam 2, which goes beyond the life-imitating-cinema construct of Drishyam and settles for a premise in which the evolving plot of a work-in-progress movie has the potential of mirroring what the future holds for Georgekutty, his family, the police and the unsolved murder case.

In terms of structure and rhythm, writer-director Jeethu Joseph follows pretty much the arc of the original film. Since it has to make do with a set of plot pieces that the audience has prior knowledge of, Drishyam 2 has to slog that much harder to sustain, let alone heighten, interest.

We are aware of how Varun, the spoilt son of inspector-general of police Geetha Prabhakar (Asha Sharath), met his end and where his body was hidden. The police have no clue. Neither do the townspeople. They have their own theories. There is much beating around the bush before the cops resume their quest for the clinching evidence that they need to nail Georgekutty.

Drishyam 2 hits its stride only when the police, led by an IPS officer (Murali Gopi), swing into action. Georgekutty is unruffled. His wife Rani (Meena) is a bundle of nerves and his traumatised elder daughter Anju (Ansiba) is a wreck. Any talk about the unfortunate incident is therefore a strict no-no in Georgekutty's home.

The law-abiding, affable cable TV operator once drew inspiration from the movies he devoured sitting in his office. Intelligent people do not read newspapers, he had proclaimed to his family, a rather unusual belief to hold in a part of India where newspapers and periodicals are known to launch a thousand debates.

In Drishyam 2, the screen has split into several smaller blocks and landed on his mobile phone, which links Georgekutty to the closed-circuit surveillance set-up in his workplace and the movie theatre. He has also graduated from merely consuming movies to planning the production of a film for which he engages veteran screenwriter Vinayachandran (Saikumar) to work on a failproof script.

Other supporting characters make significant contributions to the plot: an alcoholic, abusive man Sabu (Sumesh Chandran), his wife Saritha (Anjali Nair), a victim of domestic violence who Rani is very close to, and a murder convict Jose (Ajith Koothattukulam) who has just completed his jail term and is keen to start over. And of course, there are Varun's distraught parents, Geetha and

Prabhakar (Siddiqui), who have returned from the US in the hope of finally finding their son's remains and performing his last rites. In an early scene, the dead boy's dad pleads with Georgekutty to reveal the whereabouts of the body. But that is akin to banging one's head against a wall. It is one father to another. But Georgekutty is made of sterner stuff.

Georgekutty's life was unabashedly about aping the movies. Movies are now his life. In the early moments of Drishyam 2, he frets over the last-minute postponement of the release of a Mammootty movie due to issues with the censor board. It would have fetched a good initial, he tells his wife.

Neither is that all. Georgekutty rues passing up the chance of releasing a Tamil film in his theatre. That apart, he drives the writer of his film to chip away at the climax until it is absolutely perfect. I want my film to be out of the ordinary, he asserts.

That is one thing Drishyam 2 definitely isn't. Besides being hobbled by a sluggish and protracted prelude, it is strewn with red herrings that do not yield meaningful results until inordinately late in the film. By then, the narrative is in danger of losing its sting. A couple of throws of the dice at the end do manage to just about pull things back a little.

The battle of wits between Georgekutty and the police had, for the most part, held us in thrall in Drishyam. In the sequel, the confrontations, enlivened as they are by Murali Gopi's presence, are not quite as exciting. It is only in the lengthy build-up to the climax that Georgekutty's clever stratagems come to the fore and give the proceedings a fillip. The twists and turns are not only not as startling as they were the first time around, they are also way less convincing.

Drishyam, too, had taken three quarters of an hour to set itself up for the cat-and-mouse game between Georgekutty and the police IG. But from that point on, the pace of the film had quickened. One waits in vain for that to happen in Drishyam 2.

Mohanlal is flawless yet again as the husband/father who will stake his all to keep the police at bay. The other actors in the cast, especially Murali Gopi, pull their weight. The writing could have done with more punch. The guessing game at the core of Drishyam 2 isn't always gripping enough.