Don't Look Up Teaser: Please Take Leonardo DiCaprio, Jennifer Lawrence Seriously. A Comet Is About To Shatter The Earth

Don't Look Up casts Leonardo DiCaprio and Jennifer Lawrence as two "low-level" astronomers, who, to their dismay, have figured out that a comet is Earth-bound 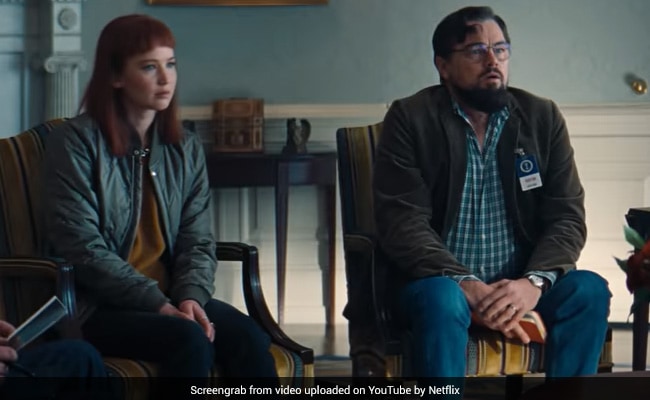 Don't look up, because a comet is earth-bound. The teaser of Netflix movie Don't Look Up dropped like a bomb... scratch that... dropped like a comet from space, on Wednesday. Written and directed by Adam McKay, Don't Look Up looks like another space disaster flick but with a stellar cast and double the intrigue. Don't Look Up casts Leonardo DiCaprio and Jennifer Lawrence as two "low-level" astronomers, who, to their dismay, have figured out that a comet is Earth-bound, one that will destroy what humankind call their home. Following their discovery, Leonardo and Jennifer try to warn everyone around the world with a media tour and they end up landing in the President's office.

Meryl Streep, who plays the role of President, do not of course take the two astronomers seriously when they voice their concern - one that can destroy Earth. Jonah Hill, who plays the President's son and Chief Of Staff, laughs it off, saying: "So boring!" The trailer begins with Leonardo DiCaprio gasping for breath as he appears to have had an anxiety attack over the impending danger. "Your breathing is stressing me out," Jonah Hill tells him in another scene.

Watch the teaser of Leonardo DiCaprio and Jennifer Lawrence's Don't Look Up here:

The ensemble cast of Don't Look Up also includes names such as Ariana Grande, Cate Blanchett, Timothee Chalamet, Tyler Perry, Ron Perlman and Kid Cudi, among others. Don't Look Up will also have an interesting cameo by Superman star Chris Evans.

Don't Look Up is slated to open in select screens on December 10 after which it will stream on Netflix from December 24.

Hawkeye Trailer: Jeremy Renner And Hailee Steinfeld's Powerful Performances Will Keep You Glued To The Screen