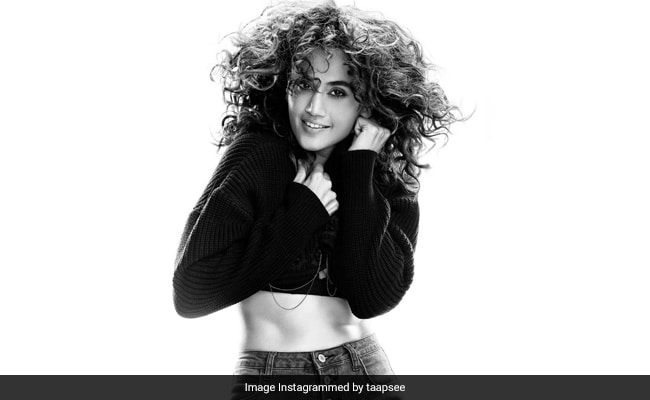 Anurag Kashyap will direct Taapsee Pannu Dobaaraa - that's the title of their new film, a thriller. Dobaaraa will mark Taapsee's third collaboration with Anurag Kashyap - he has directed her in 2018 movie Manmarziyaan and also produced Saand Ki Aankh, starring Taapsee. Dobaaraa, which is said to be a new age thriller, will be produced by Ekta Kapoor's Cult Movies, which is making its debut as a new division under her Balaji Telefilms label with the new project. Taapsee Pannu made the big announcement on Friday evening, sharing the first glimpse of the movie and wrote: "Let's do this... again!"

Talking about returning to the thriller genre yet again, Taapsee Pannu said in a statement: "I have been very lucky with thriller genre in my career so far and I always look forward to pushing the envelope under this genre. This is going to be unique more so because it's got someone like Anurag directing it and Ekta backing it," reported news agency PTI.

Meanwhile, Anurag Kashyap summed up what would make Dobaaraa stand out from conventional thrillers: "Our vision with Dobaaraa is to bring a fresh, new story to the audience and I am very excited for it. This will be my third collaboration with Taapsee and this time the attempt is to bring an interesting new take on thrillers."

Ekta Kapoor, who is backing the project, said she's "thrilled" to be working with Anurag and Taapsee: "I am thrilled that Anurag is directing the first film under Cult Movies, with Taapsee in the lead. Neither of them subscribe to the conventional and have always pushed boundaries when it comes to delivering different content. I can't wait for the world to see Dobaaraa," she said.

Dobaaraa is just another addition to Taapsee Pannu's impressive list of upcoming movies. Last seen in Thappad, Taapsee Pannu has films such as Haseen Dillruba, Loop Lapeta and Rashmi Rocket in the line-up.