Do Not Disturb, It's Chill O'Clock For Aryan And AbRam. Pic Courtesy - Mom Gauri Khan

The bro-moment won hearts on Instagram, including from the likes of Gauri Khan's friends 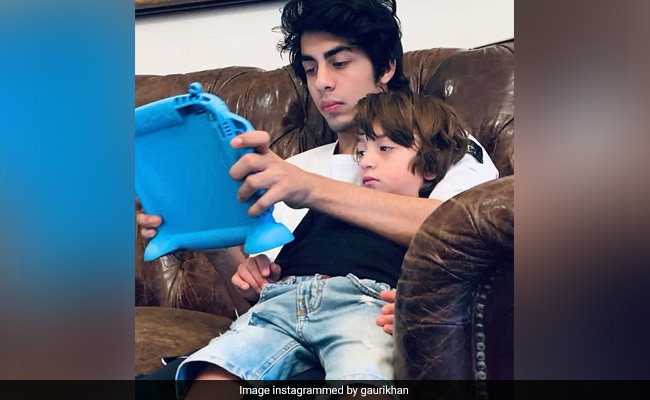 This is a DND zone because Aryan Khan and his brother AbRam are in major chill mood. On Tuesday, Gauri Khan shared a glimpse of the major chill session going on featuring the two Khan siblings with an age gap of 15 years - Aryan is 23 while AbRam is all of eight. "Boys' night out," Gauri Khan captioned a photo, in which Aryan and AbRam can be seen busy with what appears to be a video game or a tablet. AbRam can be seen safely perched on Aryan's lap, watching big brother play. The bro-moment won hearts on Instagram, including from the likes of Gauri Khan's friends Bhavana Panday, Farhan Akhtar and others.

Gauri and Shah Rukh Khan are also parents to daughter Suhana. Every now and then, the Khan kids make appearances on their parents' Instagram. Here's when Gauri Khan posted a bunch of photos of Suhana clicked by her: "Blue is my favourite colour," she wrote.

Aryan Khan attended London's Sevenoaks School with Amitabh Bachchan's granddaughter Navya Naveli Nanda - he later went to the University of Southern California in Los Angeles. In 2019, Aryan Khan voiced the character of Simba in the Hindi version of Jon Favreau's The Lion King while Shah Rukh Khan was the voice behind Mufasa.

Suhana lives in New York, where she is studying film at Columbia University. Suhana is part of Bollywood's gen-next circle, also comprising, Shanaya Kapoor, Ananya Panday and Khushi Kapoor, among others. Suhana aspires to be an actress and will pursue her career dreams only after finishing studying. Suhana has already featured in her first magazine cover for Vogue in 2018.