Disha Patani 'Kick Started' Her Tuesday Like This. Watch Video 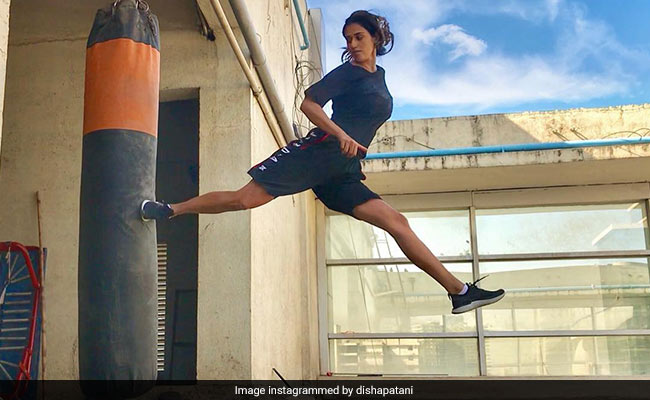 Bharat actress Disha Patani never fails to give us fitness goals and her latest Instagram entry reminds us of just that. The 27-year-old actress "kick-started" her Tuesday in the most energetic way possible. Disha, who has quite a bit of a reputation as a fitness enthusiast and has mastered several forms of martial arts, shared a video on her Instagram profile, in which she could be seen showcasing some high-octane kicks. The adrenaline-laced video garnered over 8 lakh views within a few hours on Instagram. Disha's fans cheered for her in the comments section and wrote comments like "you go girl."

Without much ado, take a look at Disha Patani's video here:

Anyone who has been following the actress on social media would agree that Disha Patani gives her fans major fitness goals. The actress frequently shares pictures and video pertaining to fitness. Disha, who played the role of a trapeze artists in her last release Bharat, has expertise in Pilates, MMA, Parkour and kickboxing. Check out the videos from Disha's fitness routines here:

Finally landed my first front flip! Didnt attempt a front tuck because of fear post my knee injury...happy i overcame my fear

First attempt to a self backflip, still need to make it much cleaner but atleast the fear is gone everyday makes a difference (also me being the stubborn me)

Before entering Bollywood, Disha Patani began her career as a model. She made her Bollywood debut in 2015 with the sports biopic M S Dhoni: The Untold Story. She has also featured in films such as Baaghi 2 and Kung Fu Yoga among others.