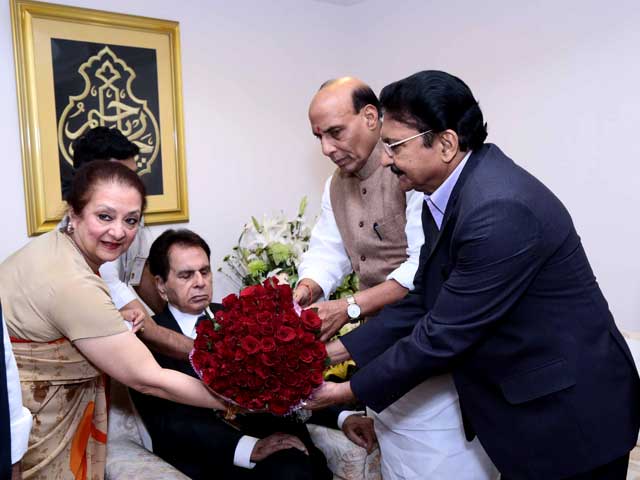 Mumbai: Ailing screen icon Dilip Kumar, known as the 'tragedy king of Bollywood', turned emotional when he was presented with Padma Vibhushan by Home Minister Rajnath Singh at his residence in Mumbai on Sunday for his contribution to Hindi cinema spanning over six decades. (Also Read: Why Saira Banu's Glad Dilip Kumar Didn't Do Film With Elizabeth Taylor)

Health did not allow me to travel to Delhi to receive the award from the President. CM @Dev_Fadnavis n Gov. Vidyasagarji too came to wish me

Tearful moment when the award was in my hands. How happy and proud my family was. Indeed Allah's mercy and blessing. pic.twitter.com/POL2I4xPxZ

Dilip saab, 93, who shot to fame with Naya Daur, Jugnu, Andaz and Devdas, was given the country's second-highest civilian award comprising a medal, certificate and shawl in the presence of his 71-year-old wife Saira Banu.

Dressed in a black suit, the actor could barely open his eyes and was helped by Sairaji when the national honour was bestowed upon him. He felt 'happy and got emotional' at the recognition, Sairaji said.

Rajnath Singh, who presented the award to Dilip saab, said, "The Prime Minister asked me to go and personally present him with the Padma Vibhushan Award in Mumbai. When Padma Vibhushan was presented in Delhi, Dilipji couldn't make it due to health concerns."

Dilip Kumarji has contributed a lot to film industry. Considering that, we've presented him with Padma Vibhushan"

Asked about Dilip Kumar's reaction after receiving the award, Sairaji later told reporters, "He has always been quiet about himself. He is happy, he smiled and there were tears in his eyes. He is an emotional and sensitive person. For him material things do not matter. He is a simple man, down to earth."

"I am very proud with the honour that the government has given him. I was emotional. I am the proudest wife. Apart from the award people always love and respect him, that matters the most. This is the biggest award," she added.

The announcement to honour Bollywood actors Dilip Kumar and Amitabh Bachchan with the prestigious Padma Vibhushan award was made by the government on the eve of Republic Day on January 25, 2015.

However, Dilip Kumar's ill-health did not allow him to attend the special function held at the Rashtrapati Bhavan in April when other awardees were honoured by President Pranab Mukherjee.

"It was kind of Rajnathji to come here personally and honour him. He could have sent anyone, but he came. When this function happened Dilip Kumar was not well. We couldn't go there. It's a great honour," Sairaji said.