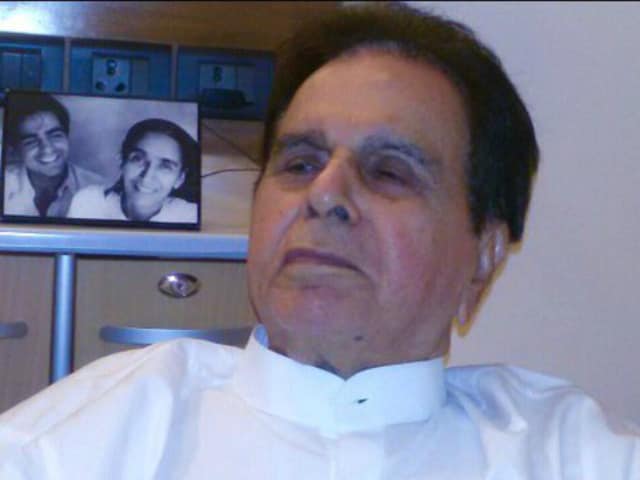 New Delhi: Dilip Kumar, 93, Hospitalised: 'Feeling Much Better,' Tweeted Actor Veteran actor Dilip Kumar, who was hospitalised after he experienced a swelling in his right leg and fever, said that he is "feeling much better" in tweet updates on Wednesday morning. Dilip Kumar was admitted to Mumbai's Lilavati Hospital, reported news agency ANI. Dilip Kumar's wife, actress Saira Banu can be seen helping him to a cuppa in one of the pictures taken at the hospital. This is the second time Dilip Kumar has been hospitalised this year. On April 16, he was admitted to the same Mumbai hospital after complaining of respiratory problems, when he was visited by actors like Aamir Khan. The doctors discharged Dilip Kumar after ensuring his health was stable on April 21. Dilip Kumar has been in and out of hospital over the last two years. Dilip Kumar will turn 94 in a few days.

Feeling much better now. Was admitted to Lilavati hospital for routine checkup. Your prayers are with me. pic.twitter.com/ii3nCMJG3f

This what ANI reported on Wednesday:

Saira Banu's manager Murshid confirmed the news of his hospitalisation in a statement to news agency IANS. "Dilip Kumar has been hospitalised today (Wednesday) morning. He complained of swelling in his right leg," said Murshid. Dilip Kumar and Saira Banu married in 1966.

Dilip Kumar also shared updates from Mumbai's Lilavati Hospital where he was admitted earlier in April:

Saira just clicked this. She said my mother (in the frame) is keeping watch over me. pic.twitter.com/F9KSOxz1aE

Allah's mercy and blessings on all for keeping me in your duas. Thank you @aamir_khan for spending time. pic.twitter.com/9ZwUchQAcv

Promoted
Listen to the latest songs, only on JioSaavn.com
Dilip Kumar was honoured with Padma Vibhushan in 2015. He also received the Padma Bhushan in 1991 and the Dadasaheb Phalke Award in 1994. He is also the recipient of the first Filmfare Best Actor award for his 1956 film Azaad. Dilip Kumar is the record holder of most Filmfare Best Actor awards - eight - a spot he shares with Shah Rukh Khan. In 1993, Dilip Kumar was also honoured with the Filmfare Lifetime Achievement award.