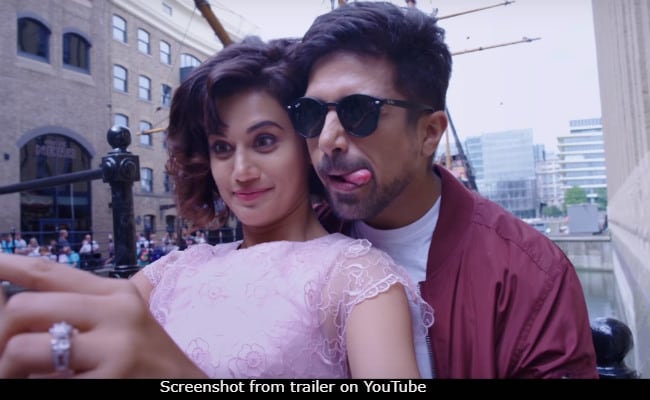 New Delhi: The trailer of Taapsee Pannu and Saqib Saleem's new movie Dil Juunglee blends the wild and the cute in an adventurous love story. The trailer begins with introductions to the protagonists of the movie - Sumit Uppal (an aspiring poet/ a gym trainer) and Koroli Nair - an English counsellor, played by Saqib Saleem and Taapsee Pannu respectively. The trailer then moves on to the supporting characters, all of who fit perfectly in their roles - Nidhi Singh, Abhilash Thapliyal and Sristi Srivastava. Koroli Nair, who is rather naive, belongs from a rich Delhi family, and things take turn when she meets Sumit, who owns a gym in Lajpat Nagar, at an English class and gets attracted to him having suffered a heart-break recently.

While Koroli was advised to have "fun" with Sumit, as advised by her friends, she ends up falling in love with him but what exactly happens after that remains unclear. Years later, the two bump into each other at a time when Koroli sports a smarter look and is seeing a handsome hunk and Sumit has found the right match for her. Will Sumit and Koroli's adventures from the past jumble up the happenings of their present? Watch the movie in theatres this February to find out.

Written and directed by Aleya Sen, Dil Juunglee is produced by Jaccky Bhagnani and Deepshika Deshmukh. Dil Juunglee arrives in theatres on February 16. Taapsee was last seen in Judwaa 2 while Dobaara: See Your Evil was Saqib Saleem's last film.