Remember Dil Dhadakne Do's Noorie? Actress Ridhima Sud, who had a fantastic screen presence among the likes of Ranveer Singh, Priyanka Chopra, Anil Kapoor and Rahul Bose in Zoya Akhtar's film, on Thursday posted a still from the movie on her Instagram story, after which several fans asked her why she never featured in another Bollywood film after Dil Dhadakne Do. Ridhima replied: "LOL, What's Bollywood? Never heard of it." Ridhima's Instafam loved her portrayal of a quasi-Juliet in the film and she thanked them for all the love but that's all about it. Ridhima did not share details about her comeback or even if she intends to make one.

Here's what she told a fan asking about her future in Bollywood: 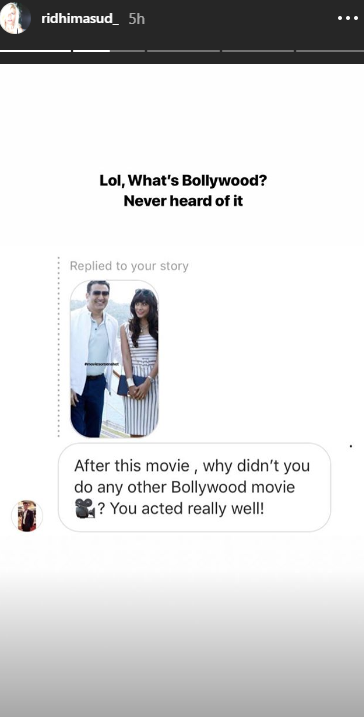 Ridhima as Noorie, played the role a rejected bride, who fell in love with her father's business rival's son (played by Vikrant Massey) on a cruise where she was invited by her father's friend (Anil Kapoor), who wanted to fix her match with his son (Ranveer Singh).

Ridhima Sud, a double major in political science and economics from the New York University, worked at the Wall Street before she switched to films. In a previous interview with NDTV, Ridhima had said that her banking job was a way to prove to her parents that she could take care of herself so "they wouldn't be too worried when I told them that I wanted to act."

At that time, Ridhima told NDTV that she's here to stay and added: "This is where I am the happiest and feel truly fulfilled. I think that I'm in the healing business. When you help tell stories and depict the truth of the human existence you heal people." She later told IANS that she would love to take up an action film in the future.