Dharavi Bank Review: The veteran actor's screen presence is undeniably strong but the Tamil accent that he is saddled with is not only affected but also disorienting. 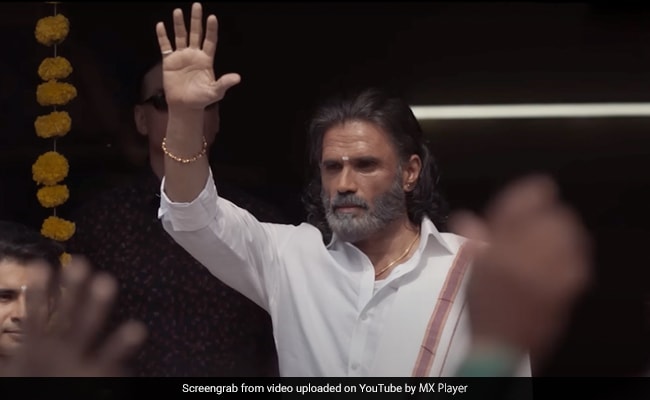 A crime lord in his labyrinth and a crime-buster on a personal mission face off against each other in Dharavi Bank, a ten-part MX Player original series built with creaky components that reek of staleness. About the only thing that in new in this crooks-and-cops drama is the presence of Suniel Shetty.

Directed by Samit Kakkad and written by Sarthak Dasgupta, Dharavi Bank hinges on the nexus between politicians and criminals - a theme that has been done to death in both films and web shows - and seeks to draw power from extreme violence perpetrated on both sides of the divide.

The lawman tasked with maintaining order thinks nothing of blinding a foe with his bare hands. Members of the gang he is charged with wiping out are capable of much worse. The mafia don hums a lullaby as he hangs a troublesome policeman and makes a murder look like suicide.

His trusted executioner, who plies his trade in a dimly-lit, squalid basement, sings Lalon Fakir (an 18th century Bengali mystic poet) while he goes about coolly dismembering people and feeding the body parts to hungry, caged German Shepherds.

The misdeeds of the gangsters are meant to be chilling. All that they end up being is totally desensitising. In looking for the casual in the macabre and the nonchalant in the nefarious, Dharavi Bank undermines its own effort to create a modern-day version of purgatory in one of the world's largest slums and turning it into a setting for an old-fashioned good-versus-evil battle.

Dharavi Bank is a cross between Nayakan and Mirzapur but is palpably without the rigour of the former and the vigour of the latter. It is over-invested in the cliches of an underworld saga peopled by murderous men who gun for each other and cock a snook at the law with impunity.

Suniel Shetty, in his first foray into the digital space, plays a ruthless gangster who runs the syndicate that gives the series its title and is so named because it is here that politicians and others with ill-gotten wealth park their funds for a rainy day.

The mafioso brooks no opposition. Anybody who dares to needle him is summarily sent to the dark and dank torture chamber where the aforementioned butcher armed with a meat-cleaver goes to work with undisguised glee.

The veteran actor's screen presence is undeniably strong but the Tamil accent that he is saddled with is not only affected but also disorienting. Trapped in a messy and meandering script, Shetty is unable to rise above a muddle that ends in a predictable spree of killings.

As the body count mounts and Dharavi Bank make its way towards its climax, the door is left ajar for another season. There would obviously be a lot of room for improvement when another lot of episodes goes into production. More of the same would be a waste of effort.

Admittedly, the bad guy in Dharavi Bank isn't an uninteresting figure. He is an exceedingly soft-spoken man who measures his utterances. His actions, often contradictory in nature, speak louder than words. He loves spending time with a niece, daughter of a widowed sister, as much as he thrives on ordering his men to unleash mayhem.

The mobster - he is called Thalaivan - has two sons who are poles apart. Shiva (Krishna Vamsi) is hot-headed; Veera (Siddharth Menon) is sedate. The former flies off the handle at the slightest provocation; the latter is a nerdy young man who advises his father to diversify and modernise his criminal enterprise instead of letting all the money in his coffers remain idle.

Dharavi is Thalaivan's impregnable fortress. He never steps out of his citadel, which is an improbable mansion with a large courtyard in the middle of Dharavi. He suffers from a fear of cawing crows - they drive him to the edge and force him out his lair for a visit to the temple to propitiate the gods.

Jayant Gavaskar (Vivek Oberoi), the joint commissioner of police foresworn to eliminating the all-powerful criminal and his cohorts, has Thalaivan in the line of fire because his enmity with the mafia don stems from a tragedy that has torn him away from his bank officer-wife, Irawati (Samiksha Bhatnagar).

JCP Gavaskar reports to the state chief minister Janvi Surve (Sonali Kulkarni), who, too, wants Thalaivan out of the way but solely for her own political gains, not for the larger good of the people.

By his own admission, Jayant believes that yukti (strategy and logic) should always be more important than shakti (strength) in a policeman's arsenal. But his subsequent actions do little to bear that out. That is hardly his fault. The crime drama itself delivers excess without let, especially with regard to the violence that the characters perpetrate on each other.

Dharavi is overplotted but it is eventually far too hackneyed to make an impact. It has a multiplicity of characters who pop in and out. Realtor Mahesh Ramakrishnan (Freddy Daruwala), who has family links with Thalaivan, has his own motives. Sharpshooter Joe (Hitesh Bhojraj) never fully reveals his hand.

A sightless hitman Michael (Luke Kenny) and his beloved Sakina (Shruti Srivastava) play their own games with each other and with the rest of the world. Practising lawyer Deepa (Bhavvna Rao), Thalaivan's estranged daughter and Mahesh's girlfriend, has distanced herself from the family because she does not want to be sucked into their benighted world.

Dharavi Bank does not deliver much percentage in terms of real thrills. Its attempts to temper its bursts of murder and mayhem with quieter moments aimed at heightening the sense of dread and foreboding do not bear fruit because the execution lacks fire and force.

Dharavi Bank sorely lacks the sort of narrative reserves that can fuel a compelling thriller. The assets at its disposal are anything but high-yielding instruments. The result is a crime drama series that, when it really matters, gropes in the dark in search of a meaningful way forward. The goal proves elusive.

Amar Colony Review: A Hypnotic Film That Is Firm In A Deliberate Rhythm