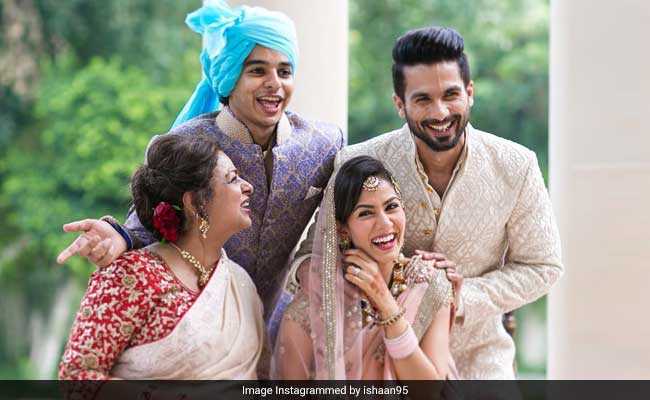 Ishaan Khatter made his debut with Beyond The Clouds (Image courtesy: ishaan95)

Ishaan Khatter, who is currently promoting his upcoming film Dhadak, which also stars Janhvi Kapoor, said he is "proud" to be identified as Shahid Kapoor's brother, news agency IANS reported. "I have no intention to make a name for myself and to separate my identity from my brother's name. I am proud to be identified as Shahid's brother, there is no shame in it," IANS quoted Ishaan Khatter as saying. Shahid Kapoor is Neelima Azeem's son with her first husband Pankaj Kapur while Ishaan is her son with Rajesh Khatter, her second husband. The 21-year-old actor, who made his debut with Iranian director Majid Majidi's film Beyond The Clouds, said creating a separate identity for himself was never his "driving force." "I believe if you are sincere with your work and you are good at it, then your identity will be created by default. Though it feels good if I am getting acknowledged for my work," Ishaan Khatter said.

Ishaan Khatter's upcoming film is the Hindi remake of Marathi blockbuster Sairat (2016), which featured Rinku Rajguru and Akash Thosar. Since the trailer release of Dhadak, the film had been constantly compared to the original movie and was subjected to online memes. While some praised the trailer of the film, others thought the remake was nowhere close to the original. Even the song Zingaat, which was part of the Marathi film and had been recreated for the Hindi version was subjected to social media trolling. This is how people reacted to trailer of Dhadak:

Ishaan Khatter on how he dealt with these negative repercussions said: "When there is hate or negative comment, I try to ignore it, and try to not bother myself with such stuff. By spreading hatred, and if it is particularly directed at us (Janhvi and Ishaan), then that person is reflecting his own personality."

In a previous interview to IANS, Ishaan had also said that he was "fortunate" to have been offered different kinds of films in a short span. "I am fortunate to be offered variety in such a short span of time. I managed to make my debut with my favourite Majid Majidi, whereas Dhadak is giving me a huge mass exposure. I just hope that I maintain the balance. Critics have been so kind of me to praise my performance in my debut film," Ishaan told IANS.

Ishaan co-stars with Janhvi Kapoor, who is making her Bollywood debut with Dhadak. The film directed by Shashank Khaitan will hit screens this Friday.