"I was hungry, like I always am. But he (Aamir Khan) didn't offer and I didn't ask," wrote Deepika 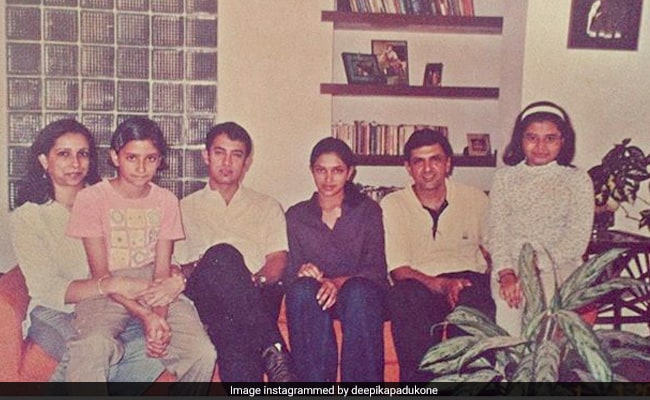 Deepika Padukone's latest throwback post featuring Aamir Khan will crack you up. The actress, who is always "hungry" (her words, not ours), shared a really old photograph from the year 2000, in which she can be seen posing with the Lagaan actor. The photograph also features Deepika's family - her father Prakash Padukone, mother Ujjala and sister Anisha. Sharing the photo, Deepika revealed the hilarious story behind it and wrote about the "awkward" lunch she had with Aamir Khan when she was 13. She wrote: "Major throwback to January 1, 2000. I was 13 and awkward. I still am. He (Aamir Khan) was having lunch. Curd Rice to be precise. I was hungry, like I always am. But he didn't offer and I didn't ask." Take a look:

Major throwback to 1st January, 2000. I was 13 & awkward.I still am. He was having lunch.Curd Rice to be precise.I was hungry, like I always am.But he didn't offer and I didn't ask... #random #anecdote @_aamirkhan

Last year, Aamir Khan gave a big shout out to Deepika Padukone's film Chhapaak after the makers dropped the trailer on the Internet. Aamir Khan had tweeted: "Great trailer and such an important movie. My congratulations and best wishes to Meghna, Deepika, Vikrant and the entire team." Take a look:

Great trailer, and such an important movie! My congratulations and best wishes to Meghna, Deepika, Vikrant, Fox, and the entire team.
Love.
a.https://t.co/5r7ZeWkG7E@meghnagulzar@deepikapadukone@masseysahib@foxstarhindi

On the work front, Deepika made her debut in Bollywood with Farah Khan's Om Shanti Om in 2007. Her second film was Bachna Ae Haseeno, in which she co-starred with Ranbir Kapoor. She went on to feature in several hits such as Love Aaj Kal, Karthik Calling Karthik, Housefull, Cocktail, Yeh Jawaani Hai Deewani, Chennai Express, Goliyon Ki Raasleela Ram-Leela, Tamasha, Bajirao Mastani and Padmaavat. Deepika Padukone next film is Kabir Khan's '83.

Aamir Khan, on the other hand, will next be seen in Lal Singh Chaddha, in which he co-stars with Kareena Kapoor.