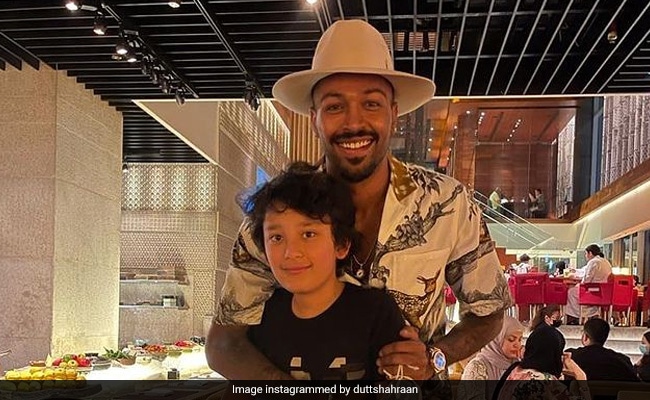 Sanjay Dutt's son Shahraan posted a picture of his fan boy moment with cricketer Hardik Pandya. On his verified Instagram handle, Shahraan, 10, posted a picture from his Dubai diaries with the cricketer and he captioned the post: "Amazing dinner night with Hardik Pandya." In the comments section of Shahraan's post, his mom Maanayata Dutt left a remark that read: "Cool dudes." That's not it, Trishala Dutt too dropped a comment on her brother's post. Her comment read: "Cool pic bro." Trishala Dutt frequently trends for her Instagram exchanges with Maanayata Dutt as well.

Sanjay Dutt married Maanayata in the year 2008 and the couple are parents to 10-year-old twins Shahraan and Iqra. The actor was earlier married to Richa Sharma, with whom he has daughter Trishala. Maanayata Dutt produced the 2019 film Prassthanam.

Trishala Dutt is a psychotherapist based out of New York. Her parents are Bollywood actor Sanjay Dutt and his first wife Richa Sharma, who died of brain tumour. Trishala was raised by her maternal grandparents in USA, where she currently stays.