"Heading to the sets of Housefull 4. Shooting in Mumbai after a very long time," tweeted Rana Daggubati 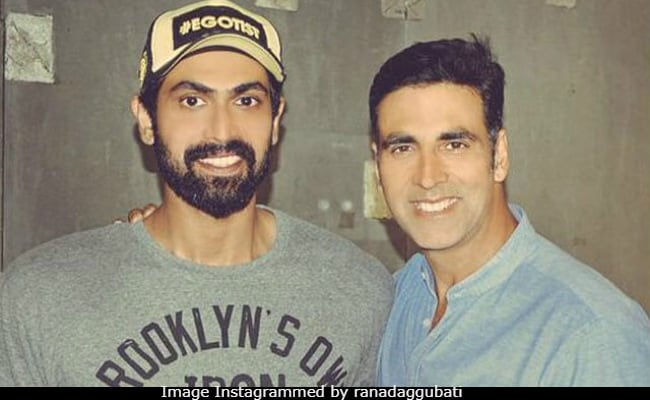 Yes, folks... Rana Daggubati is indeed part of Housefull 4. Rana Daggubati confirmed he has signed up for the film with a tweet on Friday, which said: "Heading to the sets of Housefull 4. Shooting in Mumbai after a very long time." Earlier this week, speculation was rife that Rana Daggubati has been cast in the role to be played by Nana Patekar, who stepped down from the film last month following sexual harassment allegations against him. According to a Mumbai Mirror report, Rana Daggubati went through the script of the film last week and signed the dotted line on Monday. The same report also added that the Baahubali star will apparently feature as a ghazal artiste and the portions which were already shot with Nana Patekar in Jaisalmer, will now be filmed in Mumbai.

Heading to the sets of Housefull 4. Shooting in Mumbai after a very long time!!

Before an official confirmation about his Housefull 4 role, Rana Daggubati told Mumbai Mirror that he was really looking forward to be a part of a multi-starrer Bollywood comedy: "It is always good to find work outside of Hyderabad, get to learn so much and do so many new things. I've never been part of a genre like Housefull and it's always exciting to work with different genres."

The team of Housefull 4 witnessed major reshuffling after Sajid Khan, also implicated in #MeToo stories, was replaced as the director. Farhad Samji, who helmed Housefull 3, will now be directing the project, which also includes big names such as Akshay Kumar, Riteish Deshmukh, Bobby Deol, Pooja Hegde, Kriti Kharbanda and Kriti Sanon. Meanwhile, Rana is excited about working with Akshay again after their 2015 collaboration for spy-thriller Baby. "Working with Akshay Kumar again Sajid and Farhad is something I am really looking forward to," he told Mumbai Mirror. As Housefull 4 team members were implicated as sexual predators in several #MeToo accounts, Akshay Kumar had asked the makers to cancel the shooting and his decision was also seconded by Riteish Deshmukh.

Last month, Tanushree Dutta revived a decade-old controversy by bringing her allegations of sexual harassment against Nana Patekar to the forefront, following which, the veteran actor quit the film citing "convenience" of the film's team: "Nana sahib thought of the convenience of everybody as he wishes the best for the producer and the crew and hence felt that stepping out of the project would be an appropriate thing to do at this point of time," speaking to news agency ANI, Nana Patekar's son Malhar said.

Sajid Khan also assigned a similar reason in his tweet of resignation, saying: "I must take the moral responsibility of stepping down from my directorial post, till the time I can allay the allegations and prove the truth."

Housefull 4 is slated to hit screens on Diwali next year.