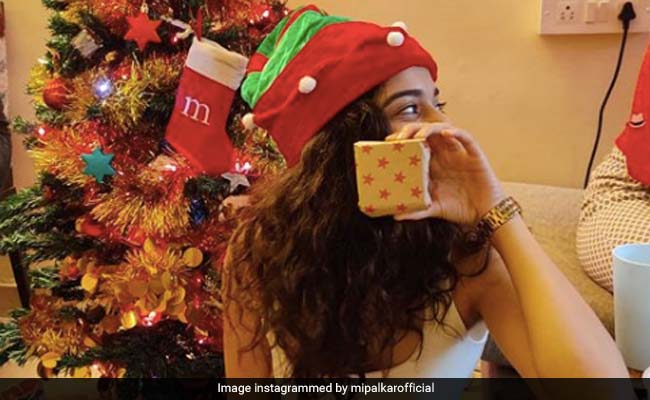 Actress Mithila Palkar made an honest confession on Instagram and said she's "lost count" of days during the coronavirus lockdown. She appeared to ask her Instafam to help her figure out if it's Christmas season already. "Is it Christmas yet?" she captioned a photo of hers, which introduced major festive vibes on Instagram. The photo appears to be Christmas throwback, in which a very happy looking Mithila, sporting a Santa-special cap, can be seen posing with her Christmas gift. The brightly lit up Christmas tree at the back is making us miss Christmas too. The 27-year-old actress added this hashtag to her post: "#lockdownlostcount."

Here's what Mithila Palkar posted on June 25, exactly six months ahead of Christmas:

Is it Christmas yet? #lockdownlostcount

Mithila Palkar's Instagram is a happy place - full of positive vibes and snippets of what's been keeping her busy during the lockdown. Her singing videos are absolute favourites of her Instafam.

For many, it's not easy to 'just speak to someone' but everyone wishes to be heard. Let's learn to be better listeners so we can hear the silences amidst the noise. Kindness is a very important virtue we all need to imbibe. Let's strive to share whatever little sunshine we own with each other and make this world a brighter place than what it is today

We could all use a little prayer to get rid of the "इडा-पिडा" we are being challenged with ! So here's a little bit of that this #SingSongSaturday Thank you @neeladhikarimusic for being a cutie and @missusdesai for being another cutie! Spread the cheer, friends! This too, shall pass PS : Excuse my amatuer singing and strumming. I'm still learning!

Mithila has also been at the top of her fitness game during the lockdown, setting work-out goals with posts such as these:

Mithila, a travel bug, has also been dreaming of going on vacations: "I'd have been in Germany with some friends right about now, in a normal world. But we aren't living in one at the moment. So I'm stealing some sunshine from the good ol' travel days while looking forward to some more of those soon," she captioned a throwback memory.

I'd have been in Germany with some friends right about now, in a normal world. But we aren't living in one at the moment. So I'm stealing some sunshine from the good ol' travel days while looking forward to some more of those soon! ☀️

Strutting around the Borough Market 💃🏻 With @sakheeg and mulled wine for company and of course, some rain! ❤️

Mithila Palkar is best known for her role as Kavya in the web series Little Things, which now streams on Netflix. Mithila made her Bollywood debut with the Nikhil Advani-directed film Katti Batti, co-starring Kangana Ranaut. She starred opposite Dulquer Salmaan in Karwaan, which was her first Bollywood film in a lead role. Mithila also headlined Netflix film Chopsticks, co-starring Abhay Deol. Mithila has another Netflix film Tribhanga in the line-up.