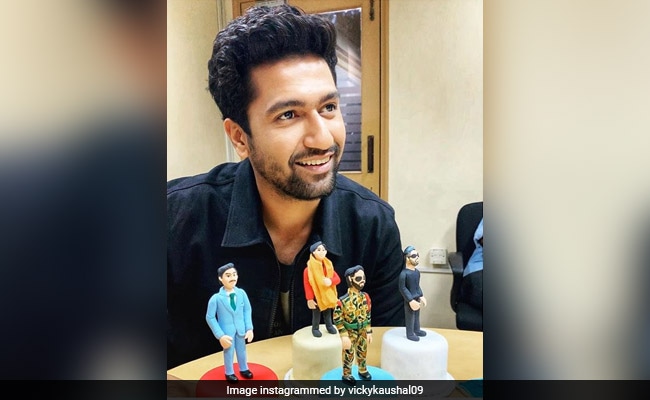 Vicky Kaushal seems to be in a throwback mood. The Sanju actor, in coronavirus lockdown, is rummaging through old albums and fishing out throwback pictures from the past. On Tuesday, the 31-year-old actor took another trip down the memory lane and came back with a super cute picture of himself. In the picture, Vicky can be seen posing with four cupcakes in front of him. The cupcakes, of four flavours, are based on four of his characters. While the red velvet cupcake is based on his 2018 movie Raazi's character Iqbal Syed, the cappuccino is based on his character Kamli from the film Sanju. The other two cupcakes, iceberg and vanilla, are based on Major Vihaan from URI: The Surgical Strike and DJ Sandz from Manmarziyaan respectively. Sharing the throwback picture, Vicky wrote, "Choose your favourite cupcake! Red velvet Iqbal. Kamli cappuccino. Major Vihaan iceberg. vanilla DJ Sandz." He also added the hashtag "throwback" to his post. Take a look:

Within minutes of posting, Vicky's picture was flooded with comments from his fans with the general favourite flavour being "all of them."

Vicky Kaushal, who is currently at home with his family, keeps sharing snippets of his home diaries on his Instagram profile. The actor has been doing it all - from cleaning the fan to flipping an omelette. Take a look:

Make way for the latest entrant in the elite club of #TheOmeletteFlippers ! #chotikhushiyaan

Thought I'd interact with my fans today... #quarantinelife

On the work front, Vicky Kaushal is best-known for his performances in films such as Masaan, Raman Raghav 2.0, Sanju, Manmarziyaan, Raazi and Uri: The Surgical Strike among others. He was last seen in the 2020 horror-thriller Bhoot - Part One: The Haunted Ship. He has Shoojit Sircar's biographical drama Sardar Udham Singh in his pipeline.