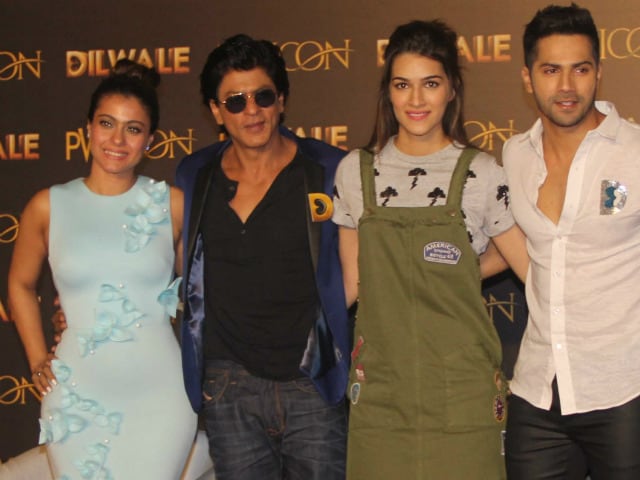 Team Dilwale photographed at a song launch event in Mumbai.

Lakhs of people were hit due to floods caused by torrential rains in Chennai and neighbouring districts and at least 325 people died.

In a letter addressed to Tamil Nadu Chief Minister J Jayalalithaa, a copy of which is with IANS, Shah Rukh wrote: "We are all deeply affected by the devastation wreaked on the city of Chennai by the fury of nature. At the same time, the resilience of the people of Chennai and the way in which the community has come together to help each other and face this adversity, is commendable and makes us all feel proud."

Appreciating the "massive effort" undertaken by the Tamil Nadu government to counter the crisis, the actor-producer and his film's team sent out Rs 1 crore to the Chief Minister's Public Relief Fund.

"On behalf of Red Chillies Entertainment and Team Dilwale, please accept our contribution of Rs 1 Cr (one crore) to the Chief Minister's Public Relief Fund. We appreciate the massive effort undertaken by your government and everyone in Chennai, to deal with this calamity and we hope our contribution will help in a small way," the letter said. (Also Read: Chennai Floods: Big B, Anushka Sharma 'Salute' Armed Forces)