Directed by Abhishek Kapoor, the film will feature Ayushmann Khurrana playing the role of a cross-functional athlete 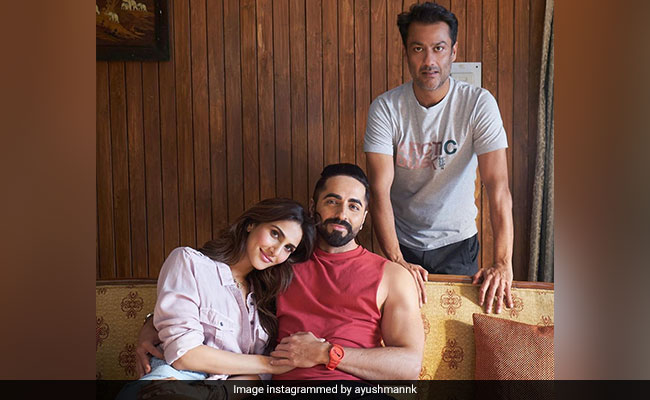 Finally! Ayushmann Khurrana and Vani Kapoor kicked off the filming of their new project titled Chandigarh Kare Aashiqui. The title of the film, a love story set in North India, was unveiled on Wednesday by the actors and the makers of the film. The first schedule of the film is being shot in Chandigarh and Ayushmann Khuurana is beyond thrilled to shoot Chandigarh Kare Aashiqui in his hometown. Sharing a picture of himself, Vani Kapoor and director Abhishek Kapoor, the actor wrote: "Next stop: My hometown Chandigarh for the first time. Excited to be a part of Abhishek Kapoor's delightful progressive love story Chandigar Kar Aashiqui. Produced by Bhushan Kumar and Pragya Kapoor, co-starring Vaani Kapoor." He also shared a photo of the film's clapboard in his post.

Vaani Kapoor, sharing the same pictures, captioned her post like this: "It's time to fall in love!"

Earlier in the day, Vaani Kapoor shared a picture of herself prepping for the shoot. "Heart full of gratitude. This gotta be special," she wrote.

Heart full of gratitude this gotta be a special

Ayushmann Khurrana will play a cross-functional athlete in the film. Vaani, who is known for her performances in movies like War and Befikre, earlier spoke about sharing screen space with Ayushmann Khurrana in the film and said in a statement: "It's a lovely heart rendering film. I have always wanted to work with Abhishek Kapoor, being so inspired by his films, this feels like an amazing opportunity to be part of his vision. Ayushman is one of the most talented actors of our generation and I'm only thrilled about our first film together to be this beautiful love story."