Catherine Zeta-Jones, 51, Is "In A Twist" Mode. See Her Fun Clip Here

"Wow! The abs," commented a fan 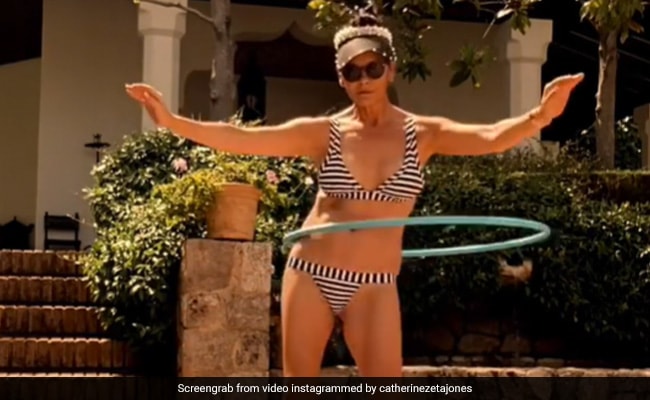 Catherine Zeta-Jones, are you even ageing? The actress proved that age is just a number for her by posting a video of herself on Thursday that will make you feel full of energy. The 51-year-old actress can be seen dancing with a hula hoop in the fun clip and her fit physique left her fans in awe. The song playing in the background of the video will definitely make you nostalgic - it's Chubby Checker's Let's Twist Again. Sharing the video, Catherine Zeta-Jones captioned it: "I'm in a twist!" Needless to say, her fans loved her clip. "Wow!! The abs," commented a fan while another wrote: "Amazing and you look so beautiful!"

Catherine Zeta-Jones, who visited India back in 2019, won the hearts of her fans here by dancing to the track Kala Chashma from Katrina Kaif and Sidharth Malhotra's 2016 film Baar Baar Dekho. She had shared the video on Instagram with this caption: "And of course, I couldn't leave without a dance." The actress loves Bollywood songs and even grooved with Anil Kapoor to the song Deewangi Deewangi at an event in New Delhi.

In terms of work, Catherine Zeta-Jones made her debut in films with Philippe de Broca's 1001 Nights in 1990. However, her breakthrough project was British TV series The Darling Buds of May. Catherine Zeta-Jones is best-known for her performances in films such as Chicago (for which she won an Academy Award), The Haunting, The Mask Of Zorro, America's Sweethearts, Traffic, Ocean's Twelve, Entrapment and The Terminal, to name a few.

She will next be seen as Morticia in the upcoming Wednesday Addams series on Netflix.