C U Soon Movie Review: Roshan Mathew doesn't miss a beat as he goes from being a smitten young man to becoming a victim of circumstances. Darshana Rajendran delivers a moving portrayal of a girl of many shades. 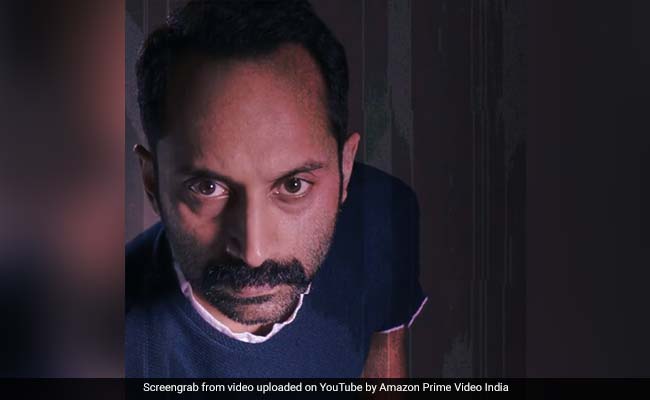 C U Soon Movie Review: Fahadh Faasil in a still from the film (courtesy YouTube).

Loads of dramatic energy complement the free-flowing virtual action that courses through C U Soon, featuring Fahadh Faasil in the role of a cyber sleuth investigating the disappearance of a cousin's girlfriend in Dubai. The film, an Onam release on Amazon Prime Video, is an instant eye-grabber. Literally so. It does not let your attention wander off the screen for a nanosecond.

Written, directed and edited by Mahesh Narayanan, the Malayalam film runs 90-odd minutes and plays out entirely on computers and smartphones. It renders a simple story of love, loss and retrieval in a socially-distanced format that is not only excitingly idiosyncratic but also consistently effective.

C U Soon, frisky in pace but grounded in unwavering technique, is an affirmation of cinema's capacity to be creative and hopeful no matter how grave and protracted a crisis is. The film has been made so that some Malayalam movie industry hands can return to work and earn their wages in these trying times.

C U Soon, produced by Nazriya Nazim and Fahadh Faasil, is a quickie that is quick to hit its stride and draw the viewer into its intriguing, dynamic virtual setting. It calls for absolute, uninterrupted concentration, which isn't, contrary to how it may sound, a dreary drill for the audience. The methods it uses instead enhance manifold the thrills that the folds of the mystery-laden tale hold.

Anu (Darshana Rajendran) and bank executive Jimmy Kurian (Roshan Mathew) find each other on Tinder. The two live in the UAE and the dating app rules that it's a perfect match. Truth be told, Jimmy has only sketchy knowledge of the girl's antecedents. One thing leads to another - which, in this film, means the couple go from 'discovering' each other on Tinder to curiosity-driven chats on Hangouts and from there to familiarity-seeking video calls on Google Duo.

The title appears on the screen 15 minutes into the film, embedded in an online chat between Jimmy and Anu after the former has proposed to the girl on a video call in the presence of his mother (Maala Parvathi).

The mother ropes in Jimmy's cousin and cyber security expert Kevin Thomas (Fahadh Faasil) to ferret out data on Anu. Kevin accedes to the request grudgingly - he isn't comfortable with the idea of violating someone's privacy. He cracks Anu's IP address and does a superficial background check.

His job done, Kevin reports to his aunt the he has "checked in every manner possible" and Anu seems "very authentic". Trouble erupts when, after spending a week in Jimmy's home, the girl vanishes into thin air, leaving behind an alarming video note.

As dark secrets and shocking truths tumble out of cyberspace and other data sources, including CCTV footage from the building that Jimmy resides in, it makes for a riveting, suspenseful love story that loses neither its momentum nor its innovation quotient as it hurtles towards a denouement.

Owing to the unusual tools it presses into the structuring of the narrative, C U Soon is fascinatingly layered. This jigsaw puzzle constructed around unanswered questions about the girl does more than just look to fit jumbled-up and scattered pieces into a genre template and string together an engaging story.

It also explores dimensions of 'seeing' and 'knowing' alongside the task of 'reading' and 'deciphering' meaning between the lines that the characters speak and type. C U Soon keeps a firm grip on what it allows us to see and hear. In the best traditions of an absorbing head-scratcher that relies more on the psychological than on the merely physical, it then leads us into what seems obvious but isn't.

If you happen to be a non-Malayali viewer without any knowledge of the language, you obviously have to frequently direct your gaze to the bottom of the screen for the English subtitles, which makes the deciphering of the intricacies of C U Soon that much more difficult. But no matter what, keeping up with the geometric patterns and visual riddles that the film's multiplicity of textual and technical elements weave is unfailingly rewarding.

The movie camera makes its presence felt only when it pans from one communication device to another, from one face to another, or from one means of text messaging (or chatting) to another. However, the all-seeing lens that looms outside the virtual universe never breaks the illusion that the film creates of actual events unfolding before our eyes the way they would do in a conventionally filmed thriller. The 'master' camera only watches and records as various other image-capturing devices incessantly yield and process information.

It all falls in place without a glitch because the editing is incredibly intelligent, the acting fabulous, and the storytelling wonderfully balanced and steady despite the novelty of the form. What raises C U Soon to a level entirely its own is that not for a moment does it let you wonder whether it would have worked better had there been no lockdown and the industry hadn't been driven indoors.

Neither does the film invite comparisons with similar fare that has emerged from the US in recent years - notably Aneesh Chaganty's Searching (also about a father looking for his missing daughter) and the 2o14 paranormal horror film Unfriended (and its sequel Unfriended: Dark Web). Or with Dibakar Banerjee's LSD; Love Sex Aur Dhokha, made ten years ago. C U Soon sets its own rules and adheres to them from beginning to end.

Two layers of images - one recorded by the devices that the characters are on, the other captured by the movie camera - constantly run one over the other in creating an impression of pace, anticipation and tension while chat boxes and popup messages stand in frequently for what in a regular film would have been spoken lines and bodily gestures.

The principal actors strike a rich vein of form. They surmount the challenge of the unconventionality of the assignment with ease. They rarely have the use of their entire body for the purpose of conveying emotions. The camera - whether they are on Duo or FaceTime or on any of the other digital means employed - is smack on their faces almost all the time. The three principal actors never go wrong.

Fahadh Faasil, as always, derives strength and thrives on his emphasis on exactitude of expression. Neither does Roshan Mathew miss a beat as he goes from being a smitten young man to becoming a victim of circumstances partly of his own making but wholly beyond his control. Darshana Rajendran, playing a role of pivotal significance, delivers a moving portrayal of a girl of many shades.

The mysteries of C U Soon couch a fond collective hope of a return to cinema as we know it when the world gets to the other side of the pandemic-erected tunnel. Until then, a film such as this, a dazzling thriller that teases every ounce of strength from the mystery genre, will enthuse us to keep the faith. See C U Soon without ado.