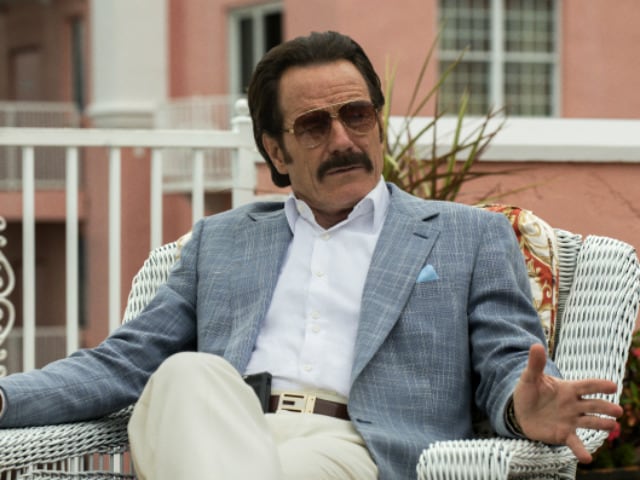 Miami: Bryan Cranston is back in the drug world, but this time he's one of the good guys.

After his highly acclaimed performance as a high school chemistry teacher turned meth kingpin in the TV series Breaking Bad, Mr Cranston plays an undercover agent who goes after Colombian cocaine lord Pablo Escobar via his Miami money laundering network in The Infiltrator.

Mr Cranston and John Leguizamo play US agents who infiltrate Escobar's financial grid and Benjamin Bratt is a drug trafficker linked to Escobar.

The movie opens on Wednesday in the United States and in September in Latin America.

Director Brad Furman's film is the latest in a series of productions on the drug lord who became one of the world's richest men in the 1980s as he oversaw a cartel that smuggled tons and tons of cocaine into the United States.

As with other criminals such as Al Capone in the 20th century, the movie and TV industries are slowly turning Escobar into a legend.

He was shot dead by the police in Colombia in 1993.

The most popular productions so far have been the Colombian series Pablo Escobar: el patron del mal the Netflix series Narcos and the movie Escobar: Paradise Lost, starring Benicio del Toro as Escobar.

"Pablo Escobar is legendary. He is an iconic figure and there is something of a taboo nature about him," Mr Cranston told AFP at a hotel in Miami, where he was promoting the film.

"He brought a lot of fear and mistrust on one hand, and yet he did some remarkably good things in his home country," Mr Cranston said.

"So lots of people were conflicted about how they felt about him. But in the end, his badness outweighs his goodness and that makes for good stories," the actor said.

It's a familiar theme for Mr Cranston. He became a global sensation with his performance as the once mild-mannered but ultimately tyrannical Walter White in Breaking Bad, winning four Emmy awards before the series ended in 2013.

"We all love gangster stories. We grew up on gangster pictures," Mr Cranston said.

He said these are "stories where someone comes from nothing and, through force or intelligence or whatever means necessary, rises to power. That's kind of the American dream."

The character of Escobar himself is never seen in The Infiltrator. But his name alone conjures up notions of vast power, wealth and danger.

Federal agent Robert Mazur, played by Mr Cranston, enters into contact with Roberto Alcaino, an Escobar underling in Miami who needs to launder the gargantuan amounts of cash his boss makes in the drug trade.

The Infiltrator is based on the story of the real-life Robert Mazur, who published a memoir in 2009 by the same name.

The work of Mazur and his colleagues led to charges being brought against more than 100 drug traffickers and corrupt bankers.

It also triggered the 1991 collapse of the Bank of Credit and Commerce International, which had served as one of the world's great money laundering machines.

The movie also follows the emotional journey of an undercover agent who must win the trust of criminals but at the same time not get too close to them personally.

"The attractiveness about this film is the sophistication of the characters is in line with what we feel about people. We are not always good, we are not always bad," said Mr Cranston, whose character must ultimately decide whether to turn in a criminal who has become a good friend.

That friend is Alcaino, the likeable drug trafficker played by Mr Bratt, also known for his role as Rey Curtis in the TV series Law & Order.

"But let's take a look at him. He is a mirror reflection of the protagonist of the film. He is a decent, loyal friend. He is a trusting family man. He is a beloved husband and father," Bratt said of Alcaino.

Referring to Mazur, Mr Cranston added: "In the end, he has to uphold his duty and do the right thing, even though it may bring some discomfort."