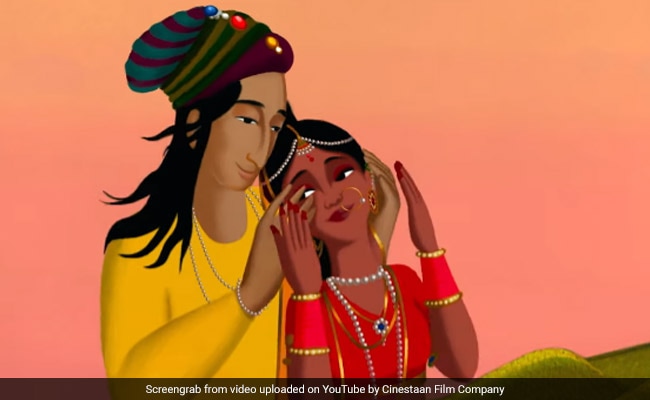 Nostalgia and humanism drip from every frame of Bombay Rose, self-taught animation filmmaker Gitanjali Rao's debut feature. The opening credits point out that she has "written, designed and directed" the film. But more than the writing and the directing, which are undeniably top-notch, it is the 'design' and intent that stand out in Bombay Rose.

And this design isn't confined merely to the palette of marvellously bright colours that we are treated to on the screen or to the different drawing styles that are employed to etch out the endearing characters and their wistful memories and flights of fancy and create the backdrops and foregrounds to the struggles they must inevitably endure.

Bombay Rose straddles a much wider spectrum: at its base is a delicate evocation of what the city has had to let go of - the title itself is an acknowledgement of the storied name that the sprawling, bustling metropolis lost somewhere along the way - and what its less fortunate denizens are in danger of losing at every bend of their lives, which are in the grip of poverty and crime.

Each principal character in the film has had to abandon a bit of himself/herself in order to fit in and survive in a harsh environment. Their back stories - Bombay Rose never lets us forget where these people have come from in quest of a better life - locate them at a remove from what their lives have now become, or are in danger of becoming.

They cling to their dreams and seek escape either in the fanciful yarns that Bollywood spins or in the belief that their fortunes will change for the better sooner than later. Either ways, it is more hope than confidence that enable them to keep chipping away at the obstacles in their way.

Bombay Rose opens with a film-within-a-film unspooling in a single-screen theatre, another reality that is fast receding, and a bunch of fans hanging on to every line of dialogue belted out by a swaggering superstar. The film is called Pyar Ka Fasana, the sort of title that belongs firmly to the past. The movie megastar resurfaces in a real-life encounter with one of the principal characters in the pre-climatic moments of the film only to spark the realisation that his heroism is no more than make-believe.

These escapist movies that keep the industry's wheels turning with their mix of melodrama, music and wish-fulfilment are right up the street for the likes of the Kashmiri youth Salim (voice: Amit Deondi), orphaned by the unrest in the Valley and forced to seek refuge in the city of dreams. For a living, he sells flowers stolen from a cemetery. Life is tough and unstable, but silver screen fantasies and love keep Salim going.

The woman he is in love with, Kamala (voice: Cyli Khare), is no better off. She, too, fights daily battles to stay afloat. She sells flowers in the daytime and works in a dance bar at night. Danger lurks in the form of a vicious gangster, Mark (Makarand Deshpande), who promises to whisk her away to Dubai. Needless to say, the ruffian cannot stand the sight of Salim and attempts to physically intimidate him into leaving Kamala alone. You are Muslim, Kamala is Hindu, Mark tells him. As if Salim needs a reminder. None of the love affairs that Bombay Rose portrays are shorn of an element of risk.

Kamala herself was saved from being married off to an older man thanks to the decision of her grandfather, a watchmaker (Virendra Saxena), to flee to Bombay from their upcountry village. Between the two they make enough money to be able to send Kamala's sister Tara (Gargi Shitole) to school.

Tara's amiable English language teacher Shirley D'Souza (Amardeep Jha), who lives alone in a quaint old house with a cat and a host of toys and mechanical contraptions that, like her, have seen better days. The old lady pines for a lover she lost years ago during her heydays as a Bollywood starlet, teaches the schoolgirl to distinguish red from crimson and purple from carmine. But her own world, in which the graveyard from where Salim filches bouquets, often slips into black and white.

Tara, on her part, extends a helping hand to Shirley when her favourite hand-wound clock and a glass ball that holds a dancing couple die on her one day. Tara turns to her grandfather for help. The old man can still perform miracles pretty much like the city that he now calls home, where, somewhere or the other, hope is killed and ignited every minute, where life never stops no matter how tough the going gets. Bombay Rose, despite its dark overtones, never lets the colours fade. It does not shy away from allowing its characters the joy of a happy closure, or at least something akin to it.

The multiple strands that constitute Bombay Rose aren't necessarily all neatly tied up in the manner of a structured Bollywood melodrama, but the film's fond tribute to popular Hindi cinema and the impact that it has on the masses hits home. Above all, the film is an elegy to a city that was and an invocation of the tenacity of people whose lives hang by a thread and whose 'heroic' acts keep the megapolis ticking. It is as if, like the cats that Gitanjali Rao lovingly draws upon for the purpose of transmitting warmth in an atmosphere of despondency - one feline creature befriends a deaf-mute street child, another is Shirley's constant companion - the city and its dwellers have nine lives.

Bombay Rose is envisioned and rendered with great skill and artistry, its storyline spoofing Bollywood in a manner that is neither patronizing nor dismissive. The soundtrack is wonderfully eclectic. It blends Yoav Rosenthal's original score with a medley of cherry-picked Hindi film hits ranging from Dil Tadap Tadap Ke Keh Raha Aa Bhi Jaa and Main Abhi Hoon Jawaan To Yeh Mera Dil Pyaar Ka Deewana as well as Brazilian crooner Caetano Veloso's Cucurrucucu Paloma, a soulful dirge penned by Swanand Kirkire and a Konkani love song, all of which instantly weave their way into our hearts. So does Bombay Rose.