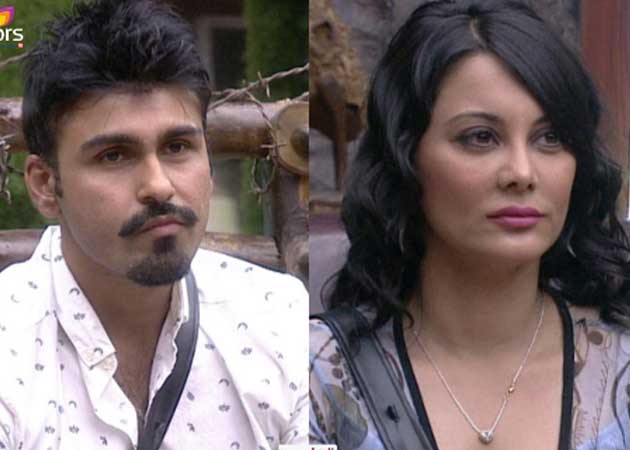 In what could be considered a new low in the mutating equations between contestants on Bigg Boss 8, actors Minissha Lamba and Aarya Babbar have come out in the open, accusing each other of the lowliest of low behaviours.

The argument between the two, to which host Salman Khan was a horrified witness, touched a nadir of loose-tongued accusations when Aarya told Salman that Minissha and he were once in a relationship.

Minissha stoutly denied this in front of Salman. On the contrary, she accused Aarya of breaching the Bigg Boss contract.

Says a source from the Bigg Boss team, "Minissha accused Aarya of getting in touch with her and suggesting that they 'act' like a pair on Bigg Boss since couples last longer on the show."

"Minissha says Aarya called her up and wondered if she'd mind if he hugged her or held her hand just to feign intimacy. Minissha says she firmly refused Aarya's offer as she is in a steady relationship in real life."

"Aarya also told Salman that Minissha and he (Aarya) were in a relationship once. The 'confession' didn't go down well with Salman who point-blank accused Aarya of being immature," added the source.

Turning the tables on Minissha, Aarya insinuates that it was Minissha who called him incessantly while he was shooting in Ladakh and Poland.

"You can check my mobile bills to see who was calling whom," Aarya told Salman.

He claims it was only after her incessant calls that he spoke to her and suggested they act as a couple on Bigg Boss together.

Promoted
Listen to the latest songs, only on JioSaavn.com
Incidentally, no two potential contestants on Bigg Boss are supposed to contact each other, as doing so amounts to a breach of contract.

On the Bigg Boss cameras, Aarya has been relentlessly asking that he be allowed to wish a special friend named Jasmine on her birthday.