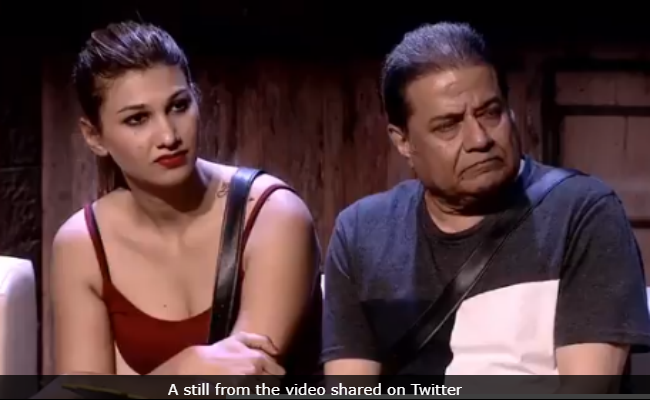 In today's episode, you'll get to see the reunion of last year's contestants Hina Khan and Hiten Tejwani, who will meet the housemates ofBigg Boss. Hina and Hiten, who are two drastically different personalities, will be interacting with the members of the Bigg Boss house and will judge the first nomination task of this season. Apart from that, you'll see that bhajan maestro Anup Jalota's relationship with his muse Jasleen Matharu will remain the topic of discussion. Anup's complicated relationship with Jasleen aroused a sense of curiosity among the contestants and questions about their relationship will be asked even during the nomination process. When Sourabh Patel asked Jasleen to define her relationship with the singer, she defended herself saying that she doesn't owe anybody an explanation and that there is no chemistry between the two of them.

When Shivashish Mishra posed the same question to Anup Jalota, the singer claimed that Jasleen is his girlfriend. However, Jasleen denied any kind of romantic relationship with Anup and said that Bigg Bossis not a dating show wherein couples are supposed to showcase their chemistry. She will lash out as the matter is strictly personal and other contestants shouldn't be commenting on it.

Another contestant, who will stay in the limelight in tonight's episode is Deepak Thakur. Deepak Thakur won't be able to stop gushing over the Bigg Boss house, not to mention his obsession with the Jacuzzi.

"Yeh jacuzzi-jacuzzi kya hai?" #DeepakThakur can't stop talking about the #BB12 house! Tune in tonight at 9 PM and watch him in his anokha andaaz. #BiggBoss12pic.twitter.com/T2rq0Oh97m

It will be interesting to see how Anup and Jasleen will deal with the constant prying of the other housemates.