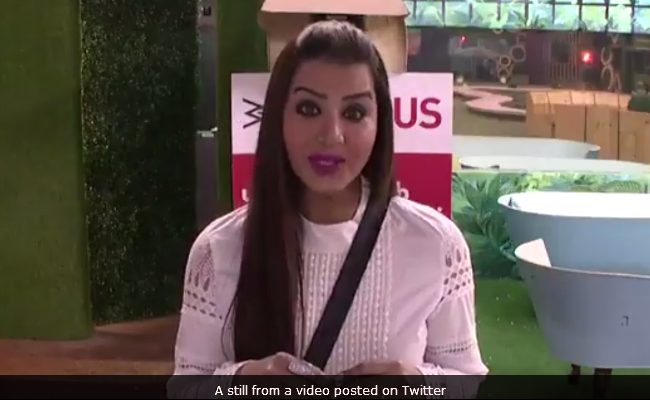 A still from the show. (Image courtesy: Bigg Boss)

New Delhi: Weekend Ka Vaar with Salman Khan had everything we wanted to watch. From Salman Khan schooling Shilpa Shinde for her personal comments on Vikas Gupta and Salman's interesting task for the contestants, (which was full of pain, shhh... about this later) gharwalo ka big secret to of course the eviction, today's episode had it all. In Sunday's episode, the bull was replaced by the katghara and the housemates were asked to choose a villain of the house. Though Vikas stood as one of the winners in the luxury budget task, he was chosen to be in the katghara. Both Shilpa and Vikas were asked to explain the story on their parts. Shilpa apologised for hitting Vikas below the belt by using the word 'couch' while Vikas admitted that running away from the house was no solution.

.@beingsalmankhan gives his verdict on Vikas vs Shilpa! Tune in at 9pm to find out what it is. #WeekendKaVaarpic.twitter.com/eShydyMkB9

Later, in the episode we saw that Puneesh Sharma by winning the Cycle task, became the new captain of the house and was asked to choose five contestants, who were the biggest rule breakers of Bigg Boss house. The chosen contestants were Vikas, Hina, Arshi Khan, Benafsha Soonawalla and Bandgi Kalra. Bandgi poured a bucket full of mud and water over herself while Vikas Gupta brushed his teeth with soya sauce as punishment.

Salman also discussed about the Cushion Factory luxury budget task in Sunday's episode. He said that Vikas won the task because of Shilpa's stupidity and also that Benafsha never deserved to stand as one of the winners. Then, came the interesting task! The gharwale were teamed up in pairs. Salman asked questions and with every no came a waxing strip. No, no not for the girls, but for the boys. Watch them scream here: (*laughs and giggles*)

.@beingsalmankhan comes up with a fun task for the #BB11 housemates! Stay tuned for the #WeekendKaVaar tonight at 9pm! pic.twitter.com/r1dApwXsll

The gharwale also revealed their biggest secrets to save themselves from the nominations. The deepest secret teller could get a chance to save himself/herself from next week's nominations. The three guests - Ex Bigg Boss contestant Tanishaa Mukerji, TV actor Karanvir Bohra and editor Sweta Singh had to choose the winner of this secret telling task. The top secrets were - Shilpa hasn't completed her graduation and she hided this from her late father while Sabhyasachi wanted to go through a sex change transformation and Vikas revealed that he's the reason for his parents' separation.

Shilpa was chosen as the best secret teller by the guests and hence got safe from next week's eviction. (she isn't aware as of now)

Promoted
Listen to the latest songs, only on JioSaavn.com
Then came the eviction. The nominated contestants were Dhinchak Pooja, Sabhyasachi, Benafsha, Hina, Hiten, Shilpa, Vikas, Priyank and Sapna Choudhary. Dhinchak Pooja received the least number of votes and thus got evicted from the house.

Phew, Sunday's episode was full of drama and a lot of entertainment. Are you excited to watch Monday's nominations?