"Get ready to scream with laughter!" posted Kareena Kapoor 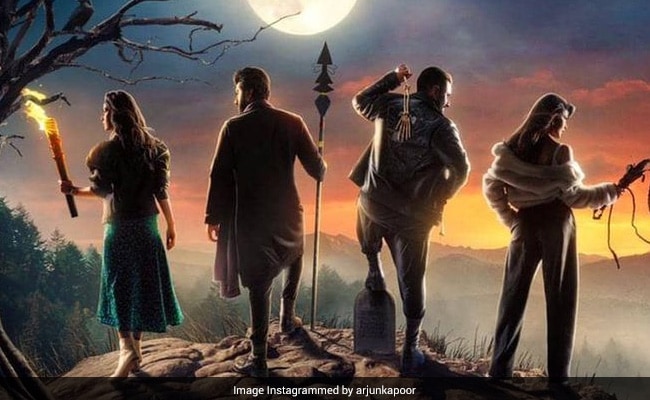 With theatres being allowed to operate at full capacity across the country, the much talked about horror comedy Bhoot Police has joined the list of upcoming releases. Bhoot Police, which stars Saif Ali Khan, Arjun Kapoor, Jacqueline Fernandez and Yami Gautam, is all set to arrive in cinemas on September 10. Arjun, Jacqueline and Yami shared the big news on Instagram while Kareena Kapoor took over for Saif Ali Khan, who isn't on social media. "Get ready to scream with laughter! Bhoot Police arrives on September 10," Kareena Kapoor posted along with a new poster of the movie. Kareena and Saif welcomed a baby son on February 21. The couple are also parents to son Taimur, who is 4.

In Bhoot Police, Saif and Arjun reportedly play a team of two ghostbusters - this is their first onscreen collaboration while Arjun has worked with Kareena before. The Bhoot Police poster gives off a rather spooky vibe - it features silhouetted versions of Saif, Arjun, Jacqueline and Yami, each holding things such as a shovel or a hunter. Here's what we are talking about:

Bhoot Police is directed by Pavan Kirpalani, who has helmed films such as Phobia and horror film Ragini MMS.

In the past, Saif Ali Khan has starred in a zombie movie titled Go Goa Gone. He was last seen in Jawaani Jaaneman after which he featured in a cameo in Dil Bechara. Saif Ali Khan also has Bunty Aur Babli 2 in his line-up. Arjun Kapoor was last seen in Panipat and his upcoming movies include Sandeep Aur Pinky Faraar. Jacqueline was last seen in Mrs. Serial Killer while Ginny Weds Sunny was Yami Gautam's last onscreen project.