Banita Sandhu Celebrated Her 24th Birthday Looking Like This 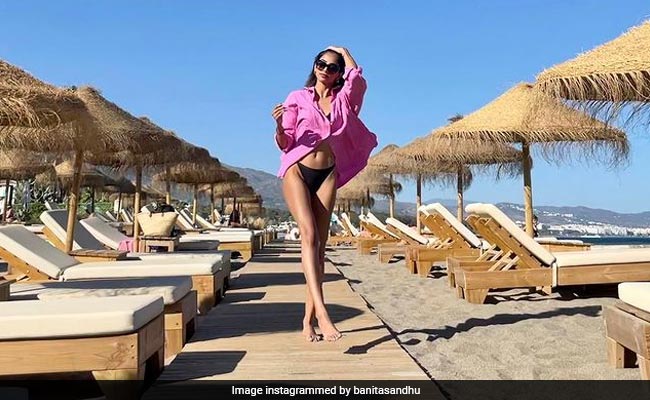 Actress Banita Sandhu, best known for her role in Shoojit Sircar's movie October, had special celebrations on Tuesday. She turned 24 on June 22 and made some special memories on her birthday. Banita Sandhu appears to be on vacation for her birthday and she lit up her Instagram with sun-kissed postcards from the tropical vacation destination. On the morning of her birthday, Banita shared a glimpse of her vacation resort and the envy inducing view from her hotel room and wrote: "Woke up a year older and feeling so loved today." Showered by birthday messages, she also thanked her fans and well-wishers: "Thank you for all the birthday messages."

Looks like Banita Sandhu's birthday itinerary also included soaking up the sun on the beach, sporting a black bikini. She added a chic touch to her beach wardrobe with an oversized shirt, thrown on casually. Banita, who is accompanied by a friend on her birthday vacation, also enjoyed a few birthday special drinks. "Walking into year 24 like," she captioned a photo of her walking on the beach.

Banita Sandhu indeed had the "best day" ever. An outfit change later, the birthday girl was pretty in pink. She styled her backless, halter dress with glaring sunglasses and a matching bag.

Banita Sandhu made her acting debut with Shoojit Sircar's 2018 film October, in which she co-starred with Varun Dhawan. Next year, Banita made her debut in Tamil cinema with Adithya Varma. Banita Sandhu has also featured in American sci-fi series Pandora and has starred in the English film Eternal Beauty.