Bachchhan Paandey Review: Demo On How Not To Make A Film Rides On Akshay Kumar's Over-The-Top Presence

Bachchhan Paandey Review: In this bewildering melee of a film, an array of fine actors is given the short shrift - Sanjay Mishra, Pankaj Tripathi, Mohan Agashe and Seema Biswas. 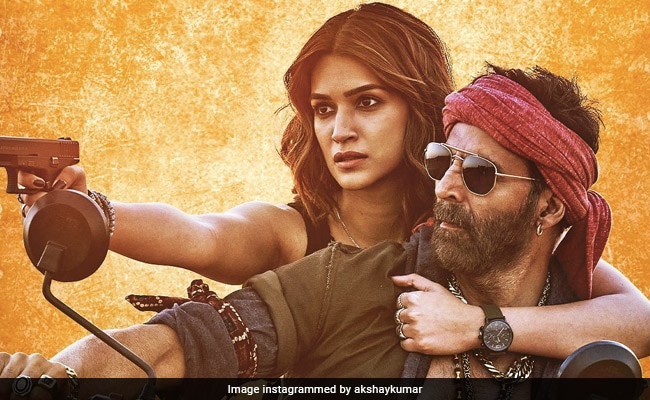 Fundamental cinematic principles receive a merciless mauling in Bachchhan Paandey. It is a scattershot action comedy that revolves around a psychopathic gangster in the badlands of north India - Bollywood's obsession with India's largest state and its storied state of lawlessness is nowhere near petering out - and a budding filmmaker who decides to attempt a biopic on the dreaded killer at great risk to her life and limb.

Bachchhan Paandey is about the making of a film but it provides a two-and-a-half-hour demo on how not to make a film. There is a film within the film and it is difficult to decide which one is worse. Everything out here, including the chaos that the storyline unleashes, is heightened caricature.

This turgid version of the 2014 Tamil hit Jigarthanda is helmed by Farhad Samji, whose directorial credits include Housefull 4, and produced by Sajid Nadiadwala, also credited as a contributor to the story.

The only link that Bachchhan Paandey has with Jigarthanda in terms of production personnel is the director of photography Gavemic U. Ary. Jigarthanda was located in Madurai city, Bachchhan Paandey is set in a semi-urban outpost. Therefore, visually, too, the two films are completely unlike each other. The cinematographer captures open, dusty expanses as well as smoke-filled, cramped interiors with equal felicity but it is all in the service of a film that dabbles only in broad strokes on a rough-hewn canvas.

Bachchhan Paandey rides squarely on the starry, over-the-top presence of Akshay Kumar. He plays a coldblooded criminal with a heart-breaking backstory that is about as convincing as a snowstorm in the Sahara. He is the undisputed godfather of Baghwa and he thrives on the fear that his name evokes. When a journalist pens a profile of his and uses a cartoonish line-drawing of the criminal's face to go with the story, the brigand takes it to heart and burns the offender alive.

The horrors that Bachchhan perpetrates on people who fall foul of him is staged as farcical spectacle aimed at making violence look cool. The man's blood-curdling toxicity elicits more disgust and repulsion than genuine dread. These scenes possess the undeniable potential to get a swell out of sections of the audience.

Worryingly, we live in times in which the comic-book celebration of violence such as the one we witness in Bachchhan Paandey seems far less problematic than the sort of hate, bigotry and hysteria that some contemporary Bollywood films brazenly incite.

Bachchhan Paandey is meant to be a masala entertainer and, therefore, one might argue, is not to be taken seriously. The characters are supposed to be playing simply for laughs. But what do you make of a film that is a comedy in which even Arshad Warsi struggles to be funny?

In Jigarthanda, the bad guy (played by Bobby Simha) was just that. He was projected as "the greatest villain" and no nobility was sought to be thrust upon him. In Bachchhan Paandey, the character is transformed into an outright hero to his men because, as one of his lackeys says late in the film, he understands the mulya (value) of pyaar (love), a reference to his tragic love story featuring Jacqueline Fernandez in a forgettable special appearance.

The Jigarthanda protagonist is an aspiring male filmmaker who sets out to make a film on a mobster after he is publicly humiliated by an industry veteran. Here, the character is female and the role is taken by Kriti Sanon who, despite the charm and energy that she exudes, is hard-pressed to come up with a convincing portrait of a woman whose ageing father has spent his entire life as a spot boy and eggs his daughter on to pursue her dream.

Sanon is Myra Devekar, a junior unit hand who is slighted by the director when she goes beyond her brief on the set of a film. She convinces the producer (Ashwin Mushran) to give her an opportunity to prove herself independently. A bus trip later the lady is in the boondocks where Bachchhan Paandey's writ runs untrammelled because neither the police force nor his criminal rivals have the measure of him.

Myra teams up with another struggler, Vishu (Arshad Warsi), son of an actor who tried his luck in the Mumbai movie industry and failed. Myra promises to give him a key role in his film and the wannabe actor, in spite of his initial reservations about going anywhere near Bachchhan Paandey, agrees to help her out in her endeavour, no matter how dangerous it is. Thus begins an adventure that confirms Vishu's worst fears. The gangster is every inch the man that he is cracked up to be. His heart is as stony as his prosthetic left eye.

In this bewildering melee of a film, an array of fine actors is given the short shrift. Sanjay Mishra is a Bachchhan Paandey confidant/informant Bufferiya, thus named because of his pronounced stutter. He barely gets a word in edgewise. Pankaj Tripathi is a slave-driving, garrulous acting coach Bhavesh Bhoplo. Mohan Agashe plays the titular character's mentor and Seema Biswas turns up in a scene and a half as the Bachchhan Paandey's mother who hasn't uttered a word since her son went on a murder spree.

Mishra and Tripathi, actors with phenomenal comic timing, are in the film to make us laugh. Tripathi does deliver a few funny moments but we can only cringe at the kind of buffoons they have been turned into. The other two, veterans of a many a fine film, are reduced to glorified extras.

But this is the sort of film in which nobody other than the leading man and, to a far lesser extent, the winsome novice out to tell a gangster tale, is allowed to emerge in the clear light of day and grab their place in the sun.

Bachchhan Paandey is a massy and messy potboiler that wilts under its own weight.

RRR Review: Jr NTR, Ram Charan Give Sweeping Saga Of Hyper-Heroism All They Have