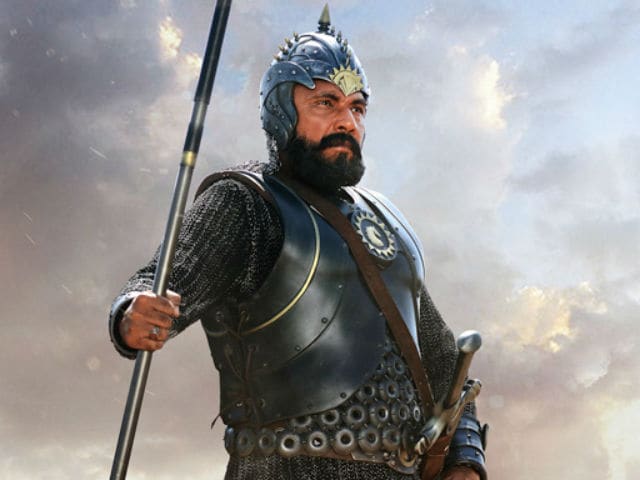 Sathyaraj as Katappa in Baahubali: The Beginning

New Delhi: S S Rajamouli's upcoming epic fantasy Baahubali: The Conclusion is still facing the threat of a ban on its release in Karnataka after Katappa actor Sathyaraj's alleged 'derogatory comment' on Cauvery water row nine years ago. The pro-Kannada activists have demanded an apology from Sathyaraj and called for a Bengaluru bandh on April 28 (the release date of the film), reports news agency PTI. Earlier in the day, Rajamouli shared a video message on Twitter, in which he appealed to the pro-Kannada outfits to reconsider their protest against Baahubali: The Conclusion. However, in response to Rajamouli's appeal, the organisations have said that the protest will continue until Sathyaraj apologises. "We are not against the film or Rajamouli. Until Sathyaraj tenders unconditional apology, our protest will continue," Vatal Nagaraj, president of Kannada Chalavali Vatal told PTI

"There will be a Bengaluru bandh on April 28 and also there will be protests across the state. We can't accept anything else other than apology by Sathyaraj," Mr Nagraj said.

In the video, Rajamouli said that it's unfair to target Sathyaraj and the actor has nothing to lose if the film doesn't release as planned. He requested to accept Baahubali: The Conclusion the way part I was received.

An appeal to all the Kannada friends... pic.twitter.com/5rJWMixnZF

The producer of the film Shobu Yarlagadda also urged the organisations to resolve the issue amicably. He told PTI, "I request that our film doesn't get dragged into this controversy."

Baahubali: The Conclusion, part 2 of S S Rajamouli's magnum opus, also stars Prabhas, Rana Daggubati, Anushka Shetty, Tamannaah Bhatia and Ramya Krishna. It is easily one of the most-anticipated and profitable films of the year. Baahubali: The Beginning had released to a blockbuster status in 2015. Part 2 will reveal why Katappa killed Baahubali.

Promoted
Listen to the latest songs, only on JioSaavn.com
Baahubali: The Conclusion releases across 6,500 screens in Telugu, Tamil and Hindi languages on April 28.