Torn from the pages of Marvel Comics, out-of-shape superheroes, a super-smart Hulk and Mjolnir make the list. 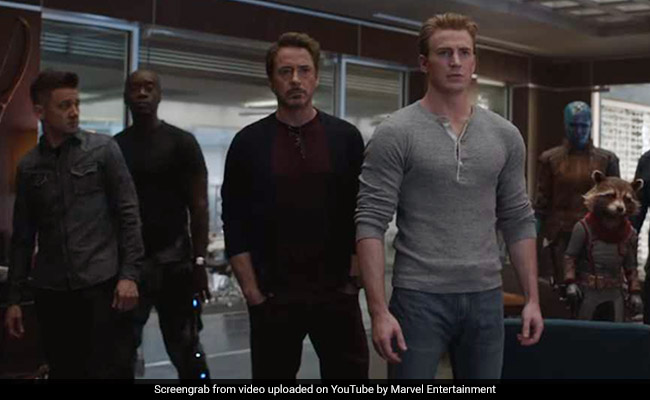 If you're one of the dozens of people on the planet that has yet to see Avengers: Endgame, be warned: Spoilers are below.

You could make a brand-new Infinity Gauntlet with the multiple comic-book-inspired Easter eggs spread throughout Marvel Studios' record-breaking Avengers: Endgame.

While the film could be enjoyed even if you hadn't watched the previous 21 movies, Endgame still served as a multi-moment thank-you to the fans who have been devoted to not only a decade's worth of films but the comics that inspired them as well.

The latest Avengers movie is a three-hour tribute to House of Ideas and its true believers. Here are the top five geekiest comic-book moments from Endgame.

The God of Thunder didn't just provide the funniest performance in Avengers: Endgame - he gave the heaviest one, too. One of the biggest laughs came with the camera revealing that the mighty Thor had let himself go. Gone was the body that the Guardians of the Galaxy devoted several minutes to worshiping when they met Thor in last year's Avengers: Infinity War, replaced by something much softer and rounder. Thor's newfound, more-to-love body and long beard in Endgame served as the slightest of nods to King Thor of the future, who appears at the very beginning of Jason Aaron's run writing the character for Marvel Comics. That Thor was older and very much over it - "it" being everything. This larger cinematic version, again taking advantage of the comedic chops of Chris Hemsworth, gave off a similar vibe.

Another heavy-lifting Avenger going through a major change? The Incredible Hulk, who goes from "Hulk smash" to "Hulk calculate" after Bruce Banner successfully merges his intellect with the Hulk's size and strength. When Tony Stark initially balks at Ant-Man, Captain America and Black Widow's plea to figure out time travel so they can try to recoup the recently destroyed Infinity Stones, the crew realizes they're still in need of a super-brain, so they go to the next person on their list, Banner. But what the Stark-less trio finds instead is a fully transformed giant green Hulk with the intellectual abilities of Banner, combining his puny human and gamma-irradiated selves. This is a fun tip of the cap to the debut of Professor Hulk, a Marvel Comics story line written by Peter David and illustrated by Dale Keown in the early '90s.

When the Avengers' big time-travel mission in Endgame begins, they find themselves back in 2012 during the battle of New York. They arrive during their victory over Loki, but in an attempt to recoup a past Infinity Stone, Captain America finds himself in an elevator of S.H.I.E.L.D. agents that, we have discovered from the earlier films, are secretly rogue Hydra spies. (It's a fun repeat of a similar scene in Captain America: The Winter Soldier, which, like Endgame, was also directed by the Russo brothers.) When Cap asks for Loki's scepter, which he knows contains the Mind Stone, the Hydra agents know something is wrong. For a brief moment, it looks as if we're in for a repeat of the well-choreographed Winter Soldier elevator brawl. And while that would have been great, nothing topped what happened next: Captain America leans over someone's shoulder and whispers "Hail Hydra" to "prove" he's on their side. This was a tip of the vibranium shield to writer Nick Spencer's story line, beginning in 2016, in which Cap said those same two words and cause a social media riot among fans (although we told everyone back then it would all be fine).

2. The passing of the shield

Captain America takes advantage of the many loopy Endgame time-travel rules during his mission to return the Infinity Stones to their proper hiding places after the Avengers' dark victory over Thanos. After being sent into the past by Banner, he comes back seconds later as an aged and elderly man with a look of satisfaction, having lived a full life while in the time stream. It's apparent that his superhero days are over. But that doesn't mean it's over for the mantle of Captain America. Cap gives his shield to Sam Wilson, aka the Falcon, anointing him as the new Captain America while his other famous sidekick, Bucky, the Winter Soldier, looks on in approval. This is another nod to Spencer, who wrote the comics featuring the Falcon as Cap in a story that looked at whether America was truly ready to see a black man take up the star-spangled mantle. This comic-book-heavy moment makes the upcoming The Falcon and The Winter Soldier limited series coming to the Disney+ streaming service highly intriguing. Will the Falcon be rocking the red, white and blue?

There was no geekier moment in Endgame than when Captain America wielded Mjolnir, the mystical hammer of Thor, which can only be held by whomever the hammer deems worthy. With Mjolnir in hand, Cap also provides the top geek moment when, with the entirety of the recently resurrected Marvel Cinematic Universe behind him, he lets out an "Avengers, assemble," the legendary comic-book call of the superteam. Cap has raised Mjolnir to the sky multiple times in Marvel Comics. His potential to wield the hammer was also hinted at in 2015's Avengers: Age of Ultron, when Captain America was able to budge Mjolnir ever so slightly when Thor wanted to prove that no other being could lift his No. 1 weapon.