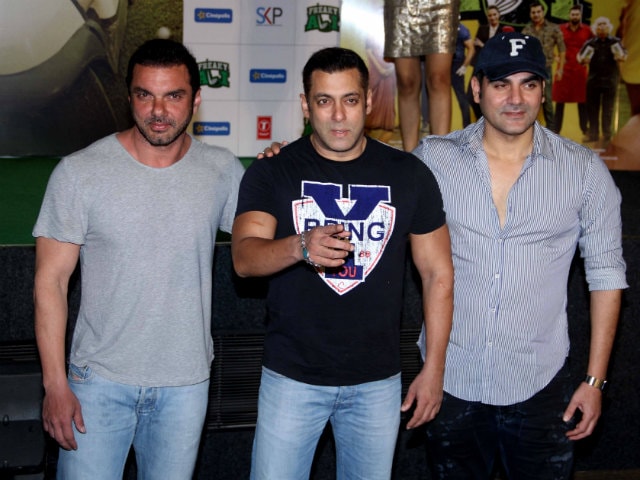 Sohail, Salman and Arbaaz photographed at the trailer launch event of Freaky Ali in Mumbai.

Mumbai: Actor-turned-director Sohail Khan said that he requested his brother Salman Khan to launch his film Freaky Ali so that it reaches a wider audience.

Sohail is excited about his next venture as a director - Freaky Ali - starring Nawazuddin Siddiqui in the lead.

"We have been honest to the film. We have stayed true to the film while casting for it. I requested bhai to be part of the film so that we can promote the film. So that it reaches more people," Sohail told reporters at the film's trailer launch on Sunday evening.

"When we thought of this event for Sunday, we were told press (media) will not come. It was like if Salman Khan will come, press will also come," he said.

Salman had to go to Ladakh for the shooting of his next film Tubelight, directed by Kabir Khan.

"Salman bhai cancelled his Ladakh trip for the trailer launch. Also, it's your (media) reach that will make the film popular as we have made all efforts," Sohail said.

Freaky Ali shows how an ordinary (poor) person can play golf, which is considered a rich man's sport.

"There is a perception about golf, tennis, that it's a rich man's sport. We are trying to break that in the film. In the film, we show that everyone who is talented should get a chance to show their talent," the Jai Ho director said.

"It's an inspirational story, from being a nobody to being an Indian champion. It's the story of rags to riches. The credit goes to the writer," he said.

He pointed out that a number of ex-cricketers have taken golf either as a hobby, passion or as a profession.

"It's a first film set against the backdrop of golf and we have added cricket for the audience. Both cricket and golf in a way are similar because the ball swings. We cultivated the idea from this," Sohail said.

In order to make sure that the game is depicted correctly in the film, the makers roped in a golf consultant.

"We had a golf consultant on the sets to help us understand the technical aspects of the game. He made things easy for us. Golf can be a complicated game. Technically, the game is shot in a right way in the film," he said.

The 46-year-old filmmaker finished the shoot of Freaky Ali in less than 40 days.

"It's shot in 38 days. Nawaz and the entire team were quite co-operative. We were prepared to do the film in this time frame. We used to shoot from 7 in morning," he revealed.

Salman, who was present at the event, said in a lighter vein that if he was to be a part of the film, the shoot would have taken 135 days.

The Hello Brother director is all praise for his film's lead actor Nawazuddin Siddiqui.

"I was watching Kick and I had all the kids (referring to his and Arbaaz Khan's children) and I was asking the kids if they would want to eat something. By mistake I asked Nawaz, who seemed like a kid from behind, also what he would like to have?" Sohail said.

"He was sitting quietly. Even while we were shooting, we did not know if he was there or not there while the discussions were on. He is the nicest and humble person to work with," he said.