Artemis Fowl Review: A Plunge Into The Lower Depths Of Nothingness

Artemis Fowl Review: A bumpy, rudderless ride despite the fact that its runtime is only 95 minutes. The film does not manage a major lift off. Even its fairies exude no charm. 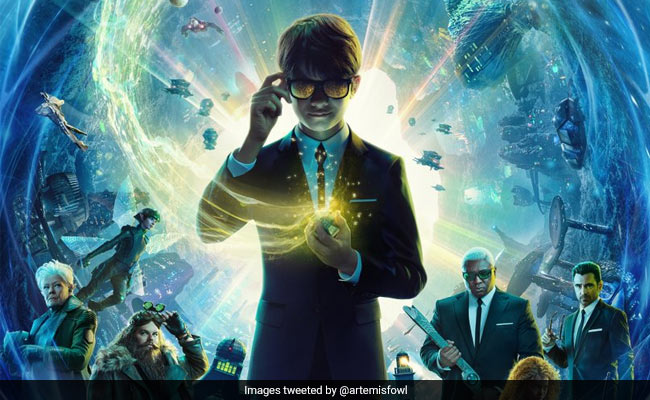 Middling fare? That would be an overstatement for Artemis Fowl, directed by Sir Kenneth Branagh, he of the slew of memorable Shakespearean screen adaptations that we never tire of. This outing is a plunge into the lower depths of nothingness.

Artemis Fowl is a bumpy, rudderless ride despite the fact that its runtime is only 95 minutes. It is taut, it has pace, and the young lead, Ferdia Shaw, is a reasonable find. Why, then, is Artemis Fowl like a bird without wings? The film does not manage a major lift off. Even its fairies exude no charm and its trolls, one of which is a mammoth one that takes on the young protagonist and his allies in the film's longest action sequence, hold no real terrors.

The tight edit appears to have done more damage than good to the film. Eviscerating it of its sinews, it turns Artemis Fowl into an elliptical, exiguous mess that will only end up foxing its target audience - children and young adults. For older viewers who are likely to approach the film with a more cynical point of view, it is bound to feel way too light and flighty to be of any consequence.

Adapted by screenwriters Conor McPherson and Hamish McColl from Irish author Eoin Colfer's YA fantasy series of novels, Artemis Fowl, among other transgressions, commits the sacrilege of throwing Dame Judi Dench into the fairy world of Haven City in the guise of Commander Root. In the novels, the character is male. She tries her darndest to fit into this weird world of elves, pixies, goblins and dwarves by assuming a grumpy, standoffish persona that is meant to transmit an imperial air. But she still sticks out.

Had Artemis Fowl been ready for distribution in the pre-pandemic phase and made its way to theatres around the world, it would probably have quickly disappeared from the screen. It is a misfire of massive proportions. It is just as well that it has landed on Disney+Hotstar, where it will have the luxury of time that will allow it find its level - and audience.

Mulch Diggums (Josh Gad), under arrest following a theft of a priceless artefact that has sent the media into a tizzy, offers to show British intelligence officials "the infinite possibilities of magic". You believe him and brace yourself for an enjoyable, trippy affair. But no, Artemis Fowl comes nowhere near delivering on Mulch's promise. This is Ireland, a land that is known for its folklore and mythology, but the film is unable to measure up to the demands of the magical story.

Artemis Fowl's father (Colin Farrell) goes missing. The son kidnaps the fairy Holly (Lara McDonnell), a reconnaissance officer of the Lower Elements Police (LEP) and daughter of 'traitor' Beachwood Short (Laurence Kinlan). He hopes that the ransom will fund the rescue of his father that he plans to launch with Domovoi Butler (Nonso Anozie), his dad's trusted Man Friday.

Artemis is "an unusual kid" who beat the European chess champ in five moves at age seven, won an architectural contest to design the Dublin Opera House at age nine and cloned a goat and named it Bruce at age ten. His credentials are extraordinary. He definitely deserved a much better film to kick off his cinematic run.

He is son of Artemis Fowl Sr., an antiquities dealer or a criminal mastermind (depending on how one views his mammoth collection of "relics from another world"). No matter how sharp-witted he is, Artemis faces great danger as he sets out to recover the Aculos, "the most powerful treasure in the fairy world", and use it as a bargaining chip to secure his father's freedom.

But the enormity of the risks he is up against is never fully portrayed as the action - the centrepiece is a raid by the fairies on Fowl Manor under the cover of a "time freeze" created by the tech whiz Centaur Foaly (Nikesh Patel, the British-Indian actor we last saw in London Has Fallen) - unfolds in a completely predictable fashion.

Artemis Fowl is about power, bravery, filial love, trust, making friend and knowing one's enemies. At the core of the story is the coming of age of the 12-year-old Artemis fighting to save the man he looks up to the most - his father. But when the hurly-burly is done, the film leaves one with a sense of being shortchanged.

The film wants us to recognize some of the significant buttons that it is trying to push. Mulch Diggums, a giant dwarf who wants to be accepted by his own but his size makes him so different from other dwarves that he is condemned to be a perennial outsider.

"Our world has never been so much in danger," Commander Root says to Holly in the film's final act. The pronouncement sets you thinking. Is the film alluding to themes larger than the ones that a story for young adults should ideally be addressing? Because Artemis Fowl does not create the wonder and magic that should have run through the film, everything else that it seeks to achieve becomes that much weaker.

Right at the fag-end of the film, we hear Artemis announce that "we have some unfinished business". He could well be talking about the film itself. It leaves too much dangling midair, even suggesting that there might be space here for a follow-up. Not that our appetite's been whetted. Artemis Fowl is soulless piffle, desultorily packaged.