"Rev. Jasper Williams spent more than 50 minutes speaking and at no time did he properly eulogize her," the singer's family said. 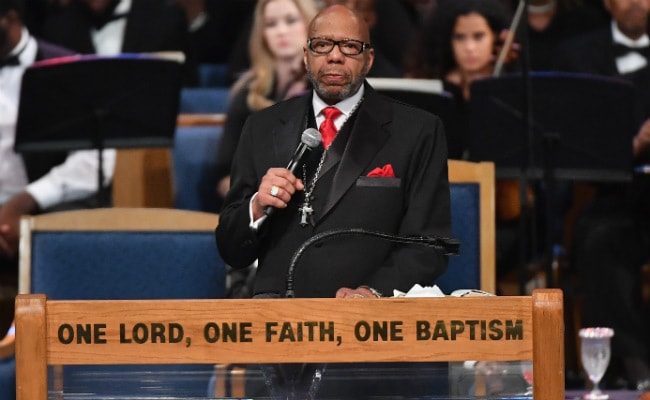 As Aretha Franklin's eight-hour funeral drew to a close last week, the Rev. Jasper Williams Jr. rose from his seat and picked up the microphone.

Clad in a black suit, accented by a bright red tie and pocket square, the Atlanta-based pastor began eulogizing the Queen of Soul with an impassioned rendition of the popular hymn, "Father, I Stretch My Hands to thee." A large silver cross swung from his neck.

"This is my subject as I attempt to eulogize Aretha Franklin; my subject is Aretha, the Queen of Soul," Williams said as the song's final notes faded on Friday.

But in the roughly 40 minutes that followed inside Greater Grace Temple in Detroit, Williams would devote more time to voicing criticisms about black parenting and "black-on-black crime" than Franklin's life and legacy. His words prompted swift backlash on social media, many slamming him for being "homophobic," "misogynistic" and disrespecting other black people.

Among those who didn't appreciate Williams's eulogy were Franklin's family members, who called his comments "offensive and distasteful," the Detroit Free Press reported.

"Rev. Jasper Williams spent more than 50 minutes speaking and at no time did he properly eulogize her," Vaughn Franklin, the late singer's nephew, said in a statement on behalf of his family. He told the Associated Press that the eulogy "caught the entire family off guard."

In the statement to the Detroit Free Press, Vaughn Franklin said Williams was asked to perform the eulogy because he had eulogized other family members, including the singer's father, the Rev. C.L. Franklin. But, he added that, "there were several other people that my aunt admired that would have been outstanding individuals to deliver her eulogy."

"We feel that Rev. Jasper Williams Jr. used this platform to push his negative agenda, which as a family, we do not agree with," the statement said.

During his eulogy, Williams drew outcry for his views on single-parent households run by black mothers and the Black Lives Matter movement.

He described raising children in a fatherless home as "abortion after birth."

Franklin was a single mother of four boys.

Kei Williams Not Related to Rev. Jasper tweeted "How do you turn Aretha Franklin's funeral into a dragging of Black women? HOW DARE YOU...."

Rep. Chaz Beasley tweeted "No disrespect to Jasper Williams, but my single mother raised me to be a man pretty well. . . #ArethaFranklinFuneral"

When Williams spoke about the Black Lives Matter movement, he used it to critique black-on-black violence.

"When we kill one hundred of us, nobody says anything," he said. "Nobody does anything."

He added: "Black-on-black crime. We're all doing time. We're locked up in our mind. There's got to be a better way. We must stop this today."

Then, he said if he were asked today 'Do black lives matter,' he would answer, 'No, black lives do not matter."

Though some supported Williams's stance, his comments were met with immediate reaction at the funeral when singer Stevie Wonder reportedly shouted, "Black lives matter."

On Twitter, some described the eulogy as a "disaster" and a "disgrace."

Over the weekend, Williams told AP he "understands" the Franklin family's opinion, saying, "I regret it. But I'm sorry they feel that way."

However, in other interviews to clarify his comments, Williams stood firm on what he said in the eulogy, reiterating many of the same points.

While many felt he disrespected black mothers, Williams said at a news conference Sunday he meant to highlight the struggle single women face when raising children on their own, an issue especially prevalent in black communities.

"I did not mean they are not able to raise their children," he said.

He repeated his opinion that black lives "cannot matter, will not matter, should not matter, must not matter until black people begin to respect their own lives." But noted that he did not mean to say black lives don't matter "in terms of the worth of a black life."

Williams said he felt that what he said was misunderstood because he didn't have enough time to "get all the intricacies" he wanted into his message.

"I just wish someone would understand my heart and understand what I'm trying to do instead of making mockery or creating difficulty or spins opposite of what I am intending," he said at the press conference. "That's what hurts me more than anything else."

He added he thought his eulogy honored Franklin.

"I feel that in honoring her I picked out various issues that are going on within our community and made that part of the forefront," he said. "I just took the opportunity of doing the best that I could under the circumstances and situations I was in. I meant nobody no harm and yet I meant the truth."