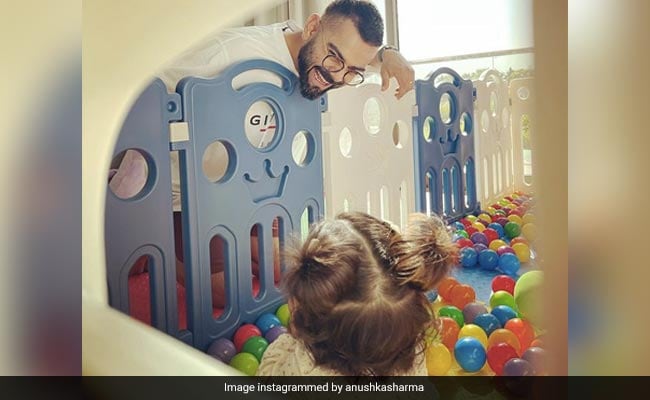 Anushka Sharma's quarantine period is over in Dubai and now and the actress and her daughter Vamika are reunited with Virat Kohli. He is leading the Indian cricket team for the T20 World Cup in Dubai. On Monday, Anushka shared a glimpse of the super adorable reunion of Virat Kohli and his baby daughter. In the photo, Virat Kohli can be seen laughing while looking at Vamika, who can be seen sitting in a play ball pit. We can't take out eyes off baby Vamika's cute ponytails. Anushka Sharma's caption for this picture of daughter Vamika and husband Virat Kohli is as lovely as the photo itself. "My whole heart in one frame," she wrote.

Anushka Sharma and Virat Kohli married in 2017; they welcomed Vamika in January this year. Anushka flew to Dubai with baby Vamika to be with Virat Kohli on his cricket tour.

The actress, on Sunday, gave her fans a sneak peek into her and Virat Kohli's "love in the time of bubble life." She shared pictures of Virat Kohli waving back at her from the balcony of his room and from the lawn and wrote: "Couldn't choose between these two captions - Quarantine makes the heart fonder and Love in the time of bubble life #OhWell, you get the point!"

Meanwhile, check out some more pictures of baby Vamika with parents Anushka Sharma and Virat Kohli: