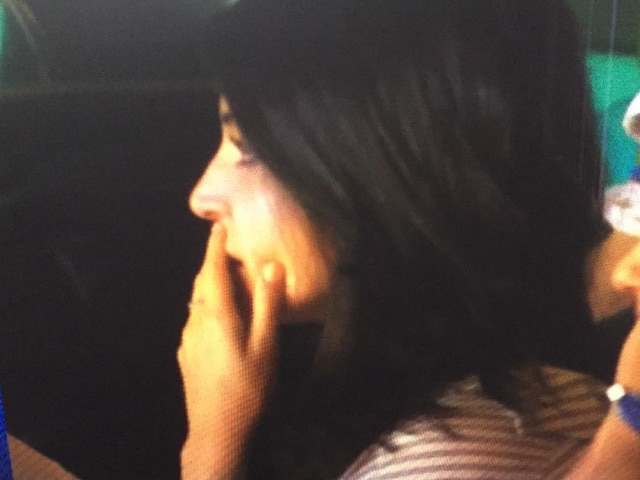 New Delhi: One of the freeze-frames of the otherwise forgettable World Cup semi-final match between India and Australia on March 26 at the Sydney Cricket Ground was the reaction of Anushka Sharma, Bollywood's rising star, when vice-captain - and ace run-getter - Virat Kohli got out after scoring just one run.

TV cameras showed Anushka, who dating Virat and had travelled to Australia to watch the much-anticipated match, burying her face in her hands as a dejected Kohli walked back to the pavilion to begin the Indian slide to defeat. (Also Read: On Twitter, Anushka Sharma Trolled Over Virat Kohli's Poor Show)

Anushka was seated in the Victor Trumper stand as Indian middle-order mainstay Kohli was caught by Australian wicket-keeper Brad Haddin to leave India struggling at 78/2.

Watching the action live from the premium stand, Anushka was till then all smiles clicking photographs sporting a white dress and round-rimmed sunglasses. Cheering for the Indian team, she was seen waving the tri-colour and also enjoying a few sips of a drink in between.

Anushka Sharma cheering for Virat and India from the stands. #IndvsAuspic.twitter.com/0XpLC6ehbj

But the spirited actress was crestfallen on the third ball of the 15th over when a bouncer from Australian pace spearhead Mitchell Johnson was top-edged by Kohli to be easily lapped up by Haddin behind the stumps.

Anushka Sharma there to cheer team India at the @scg#IND#CWC15#AUSvINDpic.twitter.com/kJBzsHSGrS

The NH10 actress looked dumbstruck and hid her face in her hands, while some of the Indian supporters in the stands could not hold back their tears. Lovers of the game in India, glued to the television screens since morning, could not believe their eyes as all fans had huge expectations of Virat, who otherwise has had a good run in Australia.

Promoted
Listen to the latest songs, only on JioSaavn.com
Anushka flew in to Sydney to support Virat, and the couple was even spotted together a couple of days back dining in a restaurant, according to media reports.

Several memes have since been doing the rounds in the social media. One such message reads: "Anushka went all the way to Sydney to see Virat score one run...True Love."