Nafisa Ali's daughter Pia Zaranna Sodhi had a close-knit wedding in Delhi while Anushka Sharma had a destination wedding in Tuscany. Both brides wore Sabyasachi 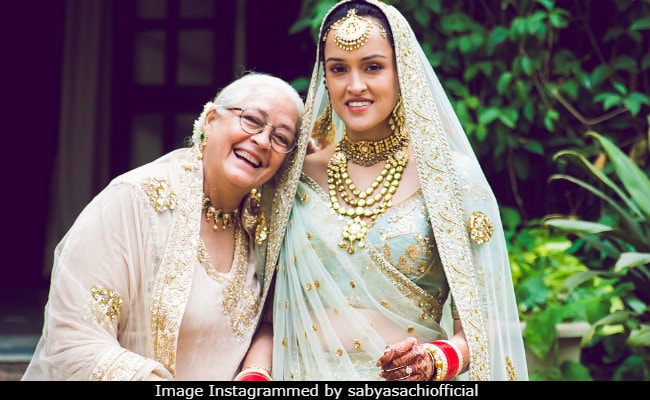 New Delhi: While the world was busy obsessing over the Virushka wedding in Tuscany, Nafisa Ali's daughter Pia Zaranna Sodhi also had a close-knit wedding in New Delhi last month. Designer Sabyasachi was the common connect between the two shaadis, who recently shared gorgeous photos from Pia's big day. The New Year witnessed Pia Sodhi's photos send the Internet into some sort of a meltdown and netizens unanimously hailed the bride for her "unconventional" choice of bridal outfit. "A Sabyasachi bride wears an unusual bird's egg blue lehenga designed in an Indo-Victorian pattern in fine Aari taari and zardosi from the Devi Collection," the designer shared the details of Pia Sodhi's wedding lehenga on Instagram. Pia Sodhi married her childhood best-friend Kshitij Khemka on December 11.

The comments section of Pia Sodhi's wedding photos is flooded with compliments like: "So refreshing to see a bride so simple yet gorgeous" and "Wowie! So, so stunning."

Moved in with my new family!! #pkshaadi

Sabyasachi, who was the designated designer for Pia's wedding wardrobe, shared his experience of the wedding in the Nafisa Ali household. Sharing a beautiful photo of the bride and her family, he wrote: "Very rarely do I come across such harmony. When a part of the country has decided to go mindless and over-the-top when it comes to their quest for glamour and beauty, weddings such as these remind you that refinement is not dead! Elegance, a certain sense of self, and happiness go a long way in making you the best version of yourself! And when you are armoured with that, you don't need much else!"

Very rarely do I come across such harmony. When a part of the country has decided to go mindless and over-the-top when it comes to their quest for glamour and beauty, weddings such as these remind you that refinement is not dead! Elegance, a certain sense of self, and happiness go a long way in making you the best version of yourself! And when you are armoured with that, you don't need much else! Image Courtesy : @fotowalle @nafisaalisodhi @piazarannasodhi @bridesofsabyasachi #Sabyasachi #TheWordOfSabyasachi

Sabyasachi, who is originally from Kolkata, left a note of admiration for the veteran actress as well.

Perhaps Nafisa @nafisaalisodhi doesn't know this, but I first saw her in Park Circus Station. I was just a young boy on a train, and she was with her father, camera in hand, photographing the kids outside. I leaned so far out of the window that I almost fell out. Then I saw her in Junoon. I was spellbound, infatuated. I wouldn't leave the movie hall even after the closing credits - hoping that she would appear on screen again. I had a Nafisa Ali obsession! Many years later, on the set of Sanjay Leela Bhansali's Guzaarish, I got to know her personally. And today I am privileged to design her daughter's wedding lehenga. I know it will make my father smile as only he knew what Nafisa meant to me - a middle class boy in suburban Calcutta, with nothing but a pocketful of dreams and a whiff of beauty through the window of a speeding train. Image Courtesy : @fotowalle @piazarannasodhi @bridesofsabyasachi #Sabyasachi #TheWordOfSabyasachi

Nafisa Ali's daughter had a two part wedding - the first one was according to Hindu rituals while the second one was a gurudwara wedding.

On the same day as Pia Sodhi's wedding, Anushka Sharma and Virat Kohli had a dream-like destination wedding in Italy's Tuscany. Anushka stole the limelight in all her wedding functions in stunning Sabyasachi creations. Starting from her Italian wedding to the Mumbai reception, with which she rounded off her wedding festivities, Anushka was the perfect Sabyasachi bride in all.

Anushka also opted for a hot pink ensemble for her mehendi day and for her engagement, she hand-picked a velvet saree from the shelves of Sabyasachi. The reception in New Delhi saw her step out as the new bride in a bright scarlet and gold saree while for the Mumbai reception, her lehenga was embroidered with "hand beaten silver thread, textured sequins and cut organza flowers."

For her engagement, Anushka @anushkasharma wanted to wear a Sabyasachi velvet saree. And we made it in our signature Gulkand Burgundy. It was hand-embroidered using miniature pearls and the finest quality zardosi and marori. She wore a stunning uncut diamond and pearl choker with matching studs. The entire look was complemented with kohl-rimmed eyes, red roses and our now iconic micro dot bindi. For all jewellery related queries, kindly contact sabyasachijewelry@sabyasachi.com #Sabyasachi #TheWorldOfSabyasachi #SabyasachiJewelry #AnushkaSharma #ViratKohli @bridesofsabyasachi

I don't think Indian brides feel complete without wearing the colour red in one of their functions. Anushka decided to wear red on her reception. And much to my absolute delight, it would be a red Benarasi saree. From the by-lanes of Peeli Kothi in Benaras. I was particularly excited about this look because I have seen an entire generation of Bengali women getting married in red Benarasi sarees. The red bindi, the sindoor and the mogras in her hair just made the look more potent and powerful. She chose to wear heritage uncut diamond choker and jhumkas from the Sabyasachi Bridal Jewelry collection. Bollywood can play a major role in spreading awareness about Indian textiles and handlooms. And I must say the occasion couldn't be better. I know copies of this saree will flood the entire country in the next few months to come, which also means that a million weaver's children will be back at school. All I can say is thank you Anushka! Virat chose to complement his new bride in a very subtle and elegant manner. He wore a black textured silk signature bandhgala with the house buttons in 18k gold and a white silk kurta with hand-woven brocade churidaar. He teamed it with mojris from the Sabyasachi accessories line and a hand-embroidered antique Pashmina shawl from our 'Kashmir Revival' project. @anushkasharma @virat.kohli @bridesofsabyasachi @groomsofsabyasachi @tajdiplomaticenclave For all jewellery related queries, kindly contact sabyasachijewelry@sabyasachi.com #Sabyasachi #TheWorldOfSabyasachi #SabyasachiJewelry #AnushkaSharmaViratKohliReception #Virushka #AnushkaSharma #ViratKohli

For her Mumbai reception, Anushka wanted to wear old world glamour. And we decided to 'Jazz' it up in smoky grey. Hand beaten silver thread, textured sequins and cut organza flowers were assembled on an embroidered tulle base to create an ethereal lehenga. Award winning master craftsmen from Lucknow rendered her stunning dupatta which was clinched on the waist with our 'Bengal tiger' belt. Anushka's look was accessorised with a necklace and earrings hand crafted with rose cut diamonds, solitaires and briolettes from the Sabyasachi fine jewelry collection. And BTW @virat.kohli looks absolutely dapper in a @raghavendra.rathore We had made a very similar piece and in the confusion of the great Indian wedding the credits got swapped. Mr. Mukherjee is personally a huge fan of the Rathore label and deeply regrets the error. @anushkasharma @virat.kohli @bridesofsabyasachi For all jewellery related queries, kindly contact sabyasachijewelry@sabyasachi.com #Sabyasachi #TheWorldOfSabyasachi #SabyasachiJewelry #AnushkaSharmaViratKohliReception #AnushkaSharma #ViratKohli #Virushka Styled by @alliaalrufai

Anushka or Pia, who do you think wore Sabyasachi better? Tell us in the comments below.
Comments
anushka sharma sabyasachinafisa ali daughter pia sodhi