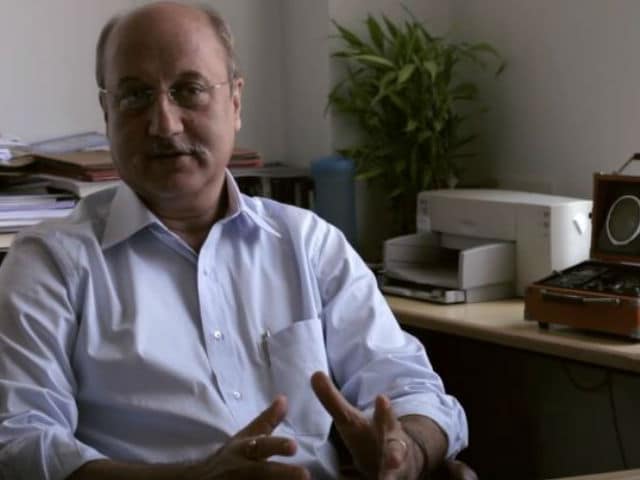 Anupam Kher in a still from Buddha in a Traffic Jam.

Kolkata: Bollywood director Vivek Agnihotri screened his political drama Buddha in a Traffic Jam open-air inside the Jadavpur University campus amid protests by the students.

Mr Agnihotri was welcomed at the campus gates with black flags, sloganeering and placards asking him to leave.

The filmmaker claimed he was manhandled and gheraoed by some students and even the glass pane of his car was left shattered in the commotion.

Attack me. Break my car. How will you break my spirit? #BuddhaAtJU

Massive protest against me and the film. They are breaking the car apart. Help needed. pic.twitter.com/Q6lwWRvZG9

The state-run varsity's alumni association, which runs the Triguna Sen auditorium, had decided to cancel the booking for a pre-release screening of the film in their hall.

The producers, however, went ahead with the screening at an open-air space in the campus saying they have support from another group of students.

"The students arranged a bed-sheet and turned it into a screen to see my film. Many watched it and realised it's not what they were thinking. It is a realistic film," Mr Agnihotri, who has in the past made films like Hate Story and Goal, told PTI.

Mayhem at Jadavpur Univ due to a small film. Broke my shoulder. But screened the film. Victory of FoE.

Even as the screening was going on in the evening after classes were over, the agitators carried on with a protest demonstration near the spot.

"We all know Anupam Kher's views in the whole debate on whatever happened in JNU. He is acting in this film which has divisive content. We are protesting against that," Sounak Mukherjee, a first year MA student of English department, said.